We think about our interstellar neighborhood in terms of stars, like Alpha Centauri and Tau Ceti, but the medium through which our relative systems move is itself a dynamic and interesting place. The Sun is currently passing through a shell of material known as the Local Interstellar Cloud. And that cloud is, in turn, located at the edge of a vast region known as the Local Bubble, scoured of material by supernova explosions in the nearby Scorpius-Centaurus and Orion Association star-forming regions. Within the past 105 years, the Sun emerged from the interior of the Local Bubble; it now moves obliquely in the direction of the high-density molecular clouds of the Aquila Rift, a star-forming region that itself reminds us how energetic ’empty’ space really is. 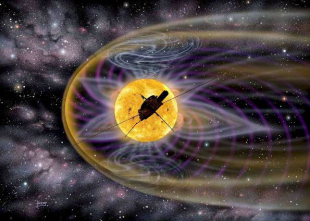 If we’re ever going to send fast missions outside the Solar System, we’re going to need plenty of data about the materials through which our vehicles move, particular as velocities mount to the point where collision with even small particles can be devastating. As of now, we’re only piecing together a broad idea of the galactic environment within 500 parsecs of the Sun, and remain in need of more detailed, in situ results from regions much closer in. Fortunately, space-based data have begun to accumulate.

Image: An artist’s take on the Ulysses mission, now approaching the end of its life, but a workhorse that has taught us much about the interstellar medium. Credit: Jet Propulsion Laboratory.

Take the Ulysses mission, which Harald Krüger (Max-Planck-Institut für Sonnensystemforschung) and Eberhard Grün (Max-Planck-Institut für Kernphysik) examine in their recent paper. The scientists take a hard look at the Sun’s position and its relation to nearby interstellar dust, noting interesting clues like the Arecibo radar findings about micron-sized interstellar meteor particles, which seem to radiate from the direction of the Geminga pulsar. Are these evidence that the supernova responsible for the Geminga pulsar created the Local Bubble itself?

At this point, we simply don’t know, but space-based studies of these exotic materials should help to clarify things. First examined during the 1930s, when astronomical evidence of starlight scattering and weakening gave clear signs of its existence, interstellar dust became available for close study when spacecraft began flying dust detectors. It became clear thirty years ago that interstellar dust grains can cross the heliospheric boundary and make their way toward the Solar System. In the 1990s, Ulysses’ dust instrument identified the mass, speed and approach direction of impacting grains as they swept through the heliosphere.

Krüger and Grün write about using future Ulysses studies to learn more, but recent NASA news seems to rule that scenario out, as the spacecraft’s power systems are in a state of terminal decline. Future Ulysses studies would have been useful for two reasons: The spacecraft’s data would have covered the entire 22-year range of a solar cycle, offering a unique set of measurements. And further readings from the outer heliosphere might have made it possible to explain the origin of an odd thirty degree shift in the flow direction of the dust Ulysses monitored.

For data from the period 1996 to 2000 showed a specific impact direction from interstellar dust, which little prepared investigators for the following:

Six years later, when Ulysses was travelling through almost the same spatial region and had an almost identical detection geometry for interstellar grains, the situation was vastly different: ﬁrst, the range in approach directions of the grains was somewhat wider…; second, and more noticeable, in 2005/06 the approach direction of the majority of grains was shifted away from the helium ﬂow direction. Preliminary analysis indicates that this shift is about 30◦ away from the ecliptic plane towards southern ecliptic latitudes… At the moment, we do not know whether it is a temporary shift limited to the time period stated above or whether it continues to the present time. Furthermore, the reason for this shift remains mysterious. Whether it is connected to a secondary stream of interstellar neutral atoms shifted from the main neutral gas ﬂow… is presently unclear.

So even within the Local Interstellar Cloud, through which we now move, the concentration of dust is little understood. Properly interpreted, these dust grains may be able to tell us more about how heavy elements are moved about within the interstellar medium and how they are affected by the five distinct clouds of gaseous material within five parsecs of the Sun. Data from the recent Stardust mission should be of help, their interpretation aided by what Ulysses has found so far. What we lack, of course, are direct observations of interstellar dust outside the Solar System, something that future missions like Innovative Interstellar Explorer may remedy if funded for launch some time in the next decade.

The paper is Krüger and Grün, “Interstellar Dust Inside and Outside the Heliosphere,” submitted to Space Science Reviews and available online.