If the Phone Doesn’t Ring, It’s Me

The line in the title above is from a Jimmy Buffett song. A friend who knows all Buffett songs line by line uses it on his answering machine, invariably provoking a chuckle when I ponder the implications. If the phone doesn’t ring, just what kind of message is being sent? Or is any message being sent at all? Thus does the singer capture the bewildered funk of romantic attachments, which can make hash out of all our logic. Like the dog that doesn’t bark (think Sherlock Holmes), the phone that doesn’t ring carries its own meaning, one we must now try to parse.

For the SETI phone isn’t ringing. If extraterrestrial civilizations are out there, is their silence a way of sending us a message? Alan Tough created a Web site with the express purpose of offering a communications venue to any nearby alien probes, spacecraft designed to study us and report home. The Invitation to ETI contains a number of essays explaining the project and more or less asking for participation by ET (Paul Davies’ contribution is titled If You’re Out There, ET, Log On!), but David Brin jogged my memory yesterday on a mailing list when he mentioned his own essay on Tough’s site, called An Open Letter to Alien Lurkers.

Wonderfully, what physicist and science fiction author Brin did in this essay is to discuss the reasons why ET might choose to remain silent. If the phone doesn’t ring, it may be because the species in question has a non-interference policy:

If you’ve monitored our TV, radio — and now our internet — perhaps you have a policy of noninterference for a different reason… in order to spare us and our culture from some harm that might come as a result of contact. An erosion of our sense of free will? Or our sense of having a high culture? We can understand this notion, too. Certainly the history of first contact between human cultures tells that the one with lower technology and sophistication often suffered ill effects.

If mercy motivates your reticence, we grasp the concept. Yet, this provokes a question — are you absolutely sure? Can you be certain we’re so fragile? Is it possible you might be mistaken? Or (again) perhaps rationalizing a decision that you made for other reasons?

A solution would be not to phone but try the Internet, a safe course of inquiry because it can be performed via e-mail or anonymous participation in online discussion groups. Eccentricity would hardly be a drawback, for any such overtures would be met, at best, with amused tolerance, some people playing along with such messages out of curiosity and gamesmanship. Perhaps it’s happening today, opines Brin, or possibly ET writes science fiction stories under a pseudonym, hoping to tease our imaginations. If the latter is the case, the sad diminution is the number of well-paying short story markets for science fiction is grounds for concern. 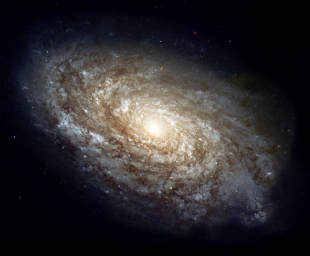 On the other hand: “Perhaps you even lace these works with special clues that can only be deciphered by purchasing and carefully reading every one of the purported author’s books…In hardcover, yet.” All of which gets across the tone of this delightful piece, one that confronts the SETI silence in provocative ways. Is the phone not ringing because any alien probe in our system is damaged and incapable of sending? Or because the extraterrestrial race is waiting for us to pass a particular milestone of development? If the latter, we could certainly use a hint.

Image: The spiral galaxy NGC 4414. Would alien astronomers within such galaxies search nearby stars for other civilizations, or would they look closer to home? Credit: NASA, The Hubble Heritage Team, STScI, AURA.

Brin lists eleven reasons for non-contact in all, including the possibility that the universe is dangerous enough to house berserker world-destroyers that might be programmed to make an end of civilizations on the rise. All the listed reasons go to the question of how little we know about the beings we hope one day to make contact with. If a SETI signal is ever received, should a response be sent immediately? The history of contact here on Earth between less technologically advanced cultures and those with superior tools has seldom ended well for those on the way up. So maybe the best strategy is considered silence until we work out the potential ramifications.

Nonetheless, with powerful messages being sent to nearby star systems from the Evpatoria Planetary Radar in the Ukraine, NASA’s Deep Space Network sites in California, Spain and Australia, and the European EISCAT system in Svalbard (the latter to contain a Doritos ad!), the question of contact could conceivably be upon us before we have developed a widely accepted mechanism for response. And if Dr. Tough is right and a smart probe may have already been attracted to our area by radio, TV and radar signals pushing into interstellar space, then the phone that doesn’t ring becomes a psychological puzzler.

Exobiology is a science currently without specimens to study. In the same way, exopsychology is a perhaps hopeless but profoundly entertaining attempt to trace out alien motivations. I say hopeless because we bring all the assumptions grafted into our bipedal species over aeons of evolutionary development to the challenge. Can we hope to understand the assumptions a species with an entirely different line of growth would make as it confronts a civilization far beneath it technologically?

Perhaps not. Actual contact between humans and extraterrestrials may be so profoundly strange that we will have no real understanding of what has happened when and if the chasm is bridged. But then, the alien race may feel quite the same way. Brin’s eleventh and final reason for non-contact is that alien species might simply find us too weird to work with. All of which brings Leo Szilard’s response to Fermi when the latter asked his famous question to mind. Where are they? “They are among us,” said Szilard, “but they call themselves Hungarians.”

A Long-Term Bet on an Artifact

Contact or no, we do, at least, know where Allen Tough comes down on this. The Toronto-based researcher, now pursuing his interests in extraterrestrial life and the human search for meaning full-time, has an extensive background in both psychology and education that illuminates his thoughts on alien encounters. Tough has placed a bet on the Long Bets site that our first encounter with alien species or their artifacts will occur here in our Solar System. He makes no bones about the benefits of what we humans call a Bracewell probe:

“Most SETI scientists agree that any ETI we detect will likely be thousands or millions of years ahead of us (because our sun and our science are so young). Such an advanced society will likely have the capacity to build and launch cheap smart autonomous probes to explore the galaxy. Also, an advanced society will likely be motivated to send out exploratory probes. If such a probe were sent a few centuries ago to explore Earth, it will likely be here by now… I am betting that extraterrestrial intelligence, in one form or another, has already reached our solar system and will be confirmed first.”

The SETI League’s Paul Shuch is on the other side of the bet, not because he thinks Tough is necessarily wrong about those alien probes, but because detecting them will be so difficult if, indeed, they are there. “It’s a matter of instrumentation,” says Shuch, “and though we’ve gotten very good at intercepting electromagnetic waves, our record for detecting even nearby natural space debris is not too stellar (pun completely intentional).”

Those of us who suspect intelligent life is vanishingly rare in this or any other galaxy think this is a bet that may take quite a long time to be resolved, but searching for anomalies in the Solar System nonetheless makes good sense (maybe, as Hungarian-born Szilard implies, we should start the search in Budapest). After all, we’re completely in the dark when it comes to potential alien motivations or accomplishments. Thinking through what they might be, and the possibilities of a result close to home, is simply a matter of prudence and thoughtful engagement with the universe. If any of David Brin’s reasons for non-contact do apply, I for one want to find out which one it is.