GRB Visible Halfway Across the Universe

The recent news of a record-setting gamma ray burst (GRB) in a distant galaxy doesn’t just raise eyebrows. It practically singes them. Occurring in the midst of a 24-hour period that saw five gamma ray bursts (a story in itself), the burst called GRB 080319B was picked up by the Swift satellite on March 19 and traced to the constellation Boötes. The afterglow brightened to magnitudes between 5 and 6, meaning that in dark locations, people with normal vision could have seen the burst remnant with the naked eye.

How extreme was this burst? Ponder the implications of what Derek Fox (Pennsylvania State University) has to say:

“These optical flashes from gamma-ray bursts are the most extreme such phenomena that we know of. If this burst had happened in our galaxy it would have been shining brighter than the Sun for almost a minute — sunglasses would definitely be advised.”

Brighter than the Sun. All of this makes the optical afterglow of GRB 080319B 2.5 million times more luminous than the brightest supernova ever recorded. It is the most intrinsically bright object ever seen. With a redshift of 0.94, the burst can be traced to a distance of 7.5 billion light years, so we’re talking about seeing something with the unaided eye that occurred more than halfway across the visible universe.

I loved what Swift science team member Judith Racusin said in this NASA news release. Noting that the mammoth burst was one of four detected on March 19, the grad student made the obvious connection: “Coincidentally, the passing of Arthur C. Clarke seems to have set the universe ablaze with gamma-ray bursts.” It’s hard to imagine anything that would have pleased Clarke more than having the heavens come alive with unimaginable energies on the day he left us.

Image: The extremely luminous afterglow of GRB 080319B was imaged by Swift’s X-ray Telescope (left) and Optical/Ultraviolet Telescope (right). This was by far the brightest gamma-ray burst afterglow ever seen. Credit: NASA/Swift/Stefan Immler, et al.

Thus do records fall. Until the 19th, the most distant object visible with the naked eye was the galaxy M33, some 2.9 million light years away. Peter Mészáros (Penn State), who leads Swift’s theory team, notes that such bursts may be formed from a massive stellar explosion that culminates in a black hole or neutron star. The optical brightness created by this one may have been the result of unusual circumstances:

“When the jet that formed during the explosion of the star slammed into surrounding gas clouds, shock waves were generated that heated the jet. The exceptional brightness of this burst requires the jet to have just the right combination of magnetic fields and velocity, which occurs very rarely.”

Further analysis of the data should tell us much more. Interestingly, one of the theories accounting for the unusual brightness is that the awesome energies of the burst were concentrated in a jet that happened to be pointed directly at the Earth. One can only imagine the result of a jet like this pointed at a biosphere no more than a few light years from the object in question. Whatever that object may have been.

For while the exploding star theory makes sense, other phenomena cannot be ruled out. We do know that gamma ray bursts are remarkably common, occurring about once a day in the form of flashes of gamma radiation arriving from all directions of the sky. The Swift satellite’s instruments allow Earth- and space-based instruments to target the afterglow of such bursts quickly, while providing redshift and lightcurve information. Be sure to check out this video of Swift’s operations. Penn State offers an excellent and detailed backgrounder on GRBs as well. 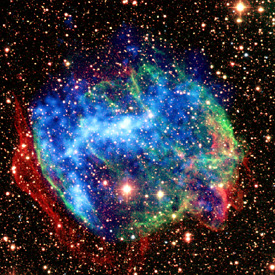 GRB studies have advanced rapidly in the past decade, following a long period in which the events were considered deeply mysterious. Military satellites monitoring compliance with the Nuclear Test Ban Treaty began to report the bursts in the late 1960s. In fact, there was a brief but pulse-quickening period when some theorized they were evidence of extraterrestrial civilizations (a theory quickly abandoned). By 1995, the Compton Gamma-Ray Observatory had collected data on 3000 bursts, showing they were being picked up from all directions in the sky.

Understanding the mechanisms at work has occupied scientists ever since, with great attention paid to GRB afterglows. Swift has provided a leap forward by localizing the afterglows almost immediately after their detection in gamma and X-rays. An emerging question: Are GRBs possible sources of gravitational waves? One mechanism that could explain some bursts is the merger of two neutron stars, or a neutron star and a black hole, both events considered candidates for generating such waves. With Swift at work and LIGO (Laser Interferometric Gravitational Observatory) searching for them, the potential link between gravitational waves and gamma ray bursts offers rich grounds for future research.