Impacts from space debris are much in the news again. The death of Arthur C. Clarke plays a role in at least some of the interest, the New York Times reprinting an op-ed piece the writer did for that paper back in 1994. This was not long after Shoemaker-Levy demonstrated what a cometary impact might do even to a massive gas giant, getting people thinking about the options if we discovered an asteroid or comet heading our way. They might also have been reminded of Rendezvous with Rama.

Clarke had discussed asteroid impacts in the early pages of the 1973 novel, setting up Project Spaceguard as a defense mechanism — a 1992 NASA workshop report on near-Earth object detection honored Clarke by being named the Spaceguard Survey. In the op-ed, Clarke made it clear what he thought the stakes were:

In view of the number of collisions that have taken place in this century alone — most notably, a comet or asteroid that exploded in 1908 in Siberia with the force of 20 hydrogen bombs — there is a very good case for a global survey of the possible danger, particularly as the shared cost among nations would be negligible compared to most national defense budgets. (Incidentally, historians might also be advised to undertake some surveying. Just as the numerous meteor-impact craters on Earth were never found until we started looking for them, so there may have been disasters in history that have been misinterpreted. Sodom and Gomorrah have a good claim to be meteorite casualties; how many others are there?)

Interesting in light of a clay tablet discovered in the ruins of Nineveh by Austen Henry Layard some 150 years ago. Itself more than 2500 years old, the tablet is apparently a copy made by an Assyrian scribe of a much older tablet. Showing drawings of constellations amidst cuneiform symbols, it is being put forth as evidence of a large fireball passing over Mesopotamia and observed by Sumerian astronomers. Alan Bond (Reaction Engines Ltd.) and Mark Hempsell (Bristol University) argue in a new book that the tablet records events in the sky on June 29, 3123 BC.

If Bond and Hempsell are right, the trajectory of a large object traveling across Pisces can be made out, consistent with an impact near the town of Köfels in the Austrian Alps. Tens of thousands might have died in the impact of this object, thought to be over a kilometer in diameter. A low incoming angle of six degrees would explain the lack of a crater at Köfels, the asteroid striking a mountain eleven kilometers from the village and exploding.

A fireball would have resulted, but no crater. The area is known to have endured a massive landslide some 500 meters thick and five kilometers in diameter, but the lack of a crater had puzzled previous scientists. Puzzled them enough, in fact, that many geologists think no impact was involved. Even more questionable is Bond and Hempsell’s suggestion that energy from the fireball traveled as a back plume out over the Mediterannean, re-entering the atmosphere in ways consistent with the destruction of the very Sodom and Gomorrah Clarke cites. Says Hempsell:

“The ground heating, though very short, would be enough to ignite any flammable material, including human hair and clothes. It is probable more people died under the plume than in the Alps due to the impact blast.”

This is a fascinating theory and I’m all for examining the historical record for possible references to asteroid impacts, but the interpretation of cuneiform tablets is exceedingly difficult work subject to numerous different and competing analyses. Let’s wait to see what specialists in the area have to say about this particular interpretation. NASA’s David Morrison also notes that we should at least look for computer modeling to demonstrate the possibility of the back plume wreaking destruction in the Sinai, an idea he says ‘sounds pretty incredible.’

Although dubious, I’d like to see this story work out for more than just scientific reasons. After all, Alan Bond’s name should be familiar to Centauri Dreams readers. Along with his rocketry work at Rolls Royce and later fusion studies for the UK Atomic Energy Authority, Bond was the lead author of the Project Daedalus final report. I defer to no one in my admiration for the work of the British Interplanetary Society on the first full-fledged engineering study of a starship, a battered photocopy of which sits about eight feet away from me, laden with annotations. 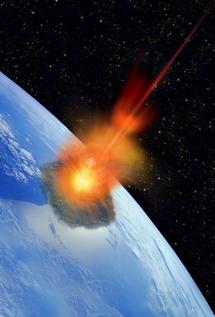 Considerably less questionable than Köfels is new evidence of the largest meteorite ever known to have struck Britain, falling some 1.2 billion years ago near the town of Ullapool. Those of us who travel often in Scotland can attest to the beauty of Ullapool and environs today, but 1.2 billion years ago ejecta from this strike were apparently scattered over an area at least fifty kilometers across. Here’s a bit of the confirmatory evidence, presented by Ken Amor (Oxford University):

“Chemical testing of the rocks found the characteristic signature of meteoritic material, which has high levels of the key element iridium, normally only found in low concentrations in surface rocks on Earth. We found more evidence when we examined the rocks under a microscope; tell-tale microscopic parallel fractures that also imply a meteorite strike.”

Image: Artist’s impression of a large meteorite hitting the Earth. The crater from the strike at Ullapool was quickly buried in sandstone, preserving evidence of the impact. How many other craters from large meteorites or even asteroids remain to be discovered? Credit: © MIKE AGLIOLO/SCIENCE PHOTO LIBRA.

The paper here is Amor et al., “A Precambrian proximal ejecta blanket from Scotland,” Geology Vol. 36, Issue 4 (April 2008), pp. 303-306 (abstract). The book on the possible strike at Köfels is Bond and Hempsell, A Sumerian Observation of the Köfels’ Impact Event (Alcin Academics, 2008). Whether or not the latter is borne out by subsequent research, it’s good to see the subject of Earth impacts continuing to make headway in the popular press, perhaps evidence that the need for planetary defense planning in the Arthur C. Clarke mode hasn’t been entirely lost on editors busy with more short-term projects.