Star Formation in the Hinterlands

Centauri Dreams always thinks it’s important to talk about images like the one below. Not the specific subject matter — this is the Southern Pinwheel galaxy M83, about which more in a moment — but about the beauty of the image. Casual browsers of astronomy photos often tell me they never realized how colorful space actually is, which is why I want to say periodically that images like these are doctored to reveal information. In this case, far-ultraviolet light is intentionally shown in blue, near-ultraviolet light in green, and radio emissions — at the 21 centimeter wavelength of gaseous hydrogen — are shown in red. 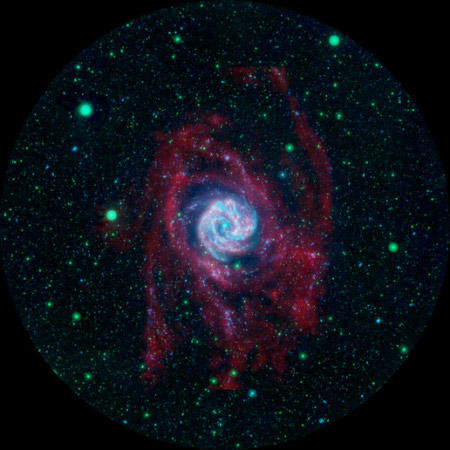 Space is undoubtedly beautiful, but what you see in many of these photos is not what you would get if you were there. In fact, not only are the colors doctored here, but this is a composite image, incorporating observations from the Very Large Array and the Galaxy Evolution Explorer (GALEX), an orbiting ultraviolet survey telescope.

Image: The outlying regions around the Southern Pinwheel galaxy, or M83, are highlighted in this composite image from NASA’s Galaxy Evolution Explorer and the National Science Foundation’s Very Large Array in New Mexico. The blue and pink pinwheel in the center is the galaxy’s main stellar disk, while the flapping, ribbon-like structures are its extended arms. Credit: NASA/JPL-Caltech/VLA/MPIA.

So what would you see if you were actually viewing M83 from the viewport of an intergalactic spaceship? Greg Laughlin wrote up this question a few years back with regard to the Sombrero Galaxy, M104, noting that if you could somehow place yourself 300,000 light years from it, your human eyes would see a galaxy so dim that it would appear only as a faint, glowing patch. For that matter, try to see M31, the Andromeda Galaxy, subtending an angle larger than the full Moon in the sky, and you’ll see precisely nothing there. Laughlin describes this key fact:

The storms from earlier this week have blown through. The sky sparkles with brilliant clarity. Yet when I step outside and look up, I can’t see the Andromeda Galaxy at all. It’s too faint. In a 1:10,000,000,000,000 scale model of M31, the stars are like fine grains of sand separated by miles. Our Galaxy, the Andromeda Galaxy, and the Sombrero Galaxy are all essentially just empty space. To zeroth, to first, to second approximation, a galaxy is nothing at all.

All of which is prelude to the real point of this post, which is that the image above lets us see things we would otherwise find invisible, in this case the Southern Pinwheel galaxy itself and the extended galactic arms in which astronomers have now identified new stars forming. Their distance from the primary disk of M83 is impressive, even startling, for M83 is only some 40,000 light years across, while the young star formation area runs up to 140,000 light years away from the center of the galaxy, a phenomenon Frank Bigiel (Max Planck Institute for Astronomy) calls ‘absolutely stunning.’

Shouldn’t these galactic outskirts be deficient in star-forming materials? You would think so, but the radio observations from the Very Large Array pinpointed the location of the necessary hydrogen, findings that mesh with what the Galaxy Evolution Explorer saw. Thus we may be looking at the kind of star formation that occurred early in the history of the cosmos, when dust and heavier elements were not plentiful. That makes M83, some 15 million light years away in the constellation Hydra, a helpful proving ground for our theories of early star formation, as per this GALEX news release. Such a relatively nearby laboratory (in cosmic terms, at least) will help us develop useful data for comparison with what we see much further out in space and, by extension, back in time.