Suppose for a moment that life really is rare in the universe. That when we are able to investigate the nearby stars in detail, we not only discover no civilizations but few living things of any kind. If all the elements for producing life are there, is there some kind of filter that prevents it from proceeding into advanced and intelligent stages that use artifacts, write poetry and build von Neumann probes to explore the stars? Nick Bostrom discusses the question in an article in Technology Review, with implications for our understanding of the past and future of civilization.

Choke Points in the Past

Maybe intelligent beings bring about their own downfall, a premise that takes in more than the collapse of a single society. Alaric’s Goths took Rome in 410, hastening the decline of a once great empire, but the devastated period that followed saw Europe gradually re-build into the Renaissance. And as Bostrom notes, while a thousand years may seem like a long time to an individual, it’s not terribly significant in the overall scheme of a civilization, which theoretically might last millions of years. No, a true filter must be something larger, a potential civilization-killer. 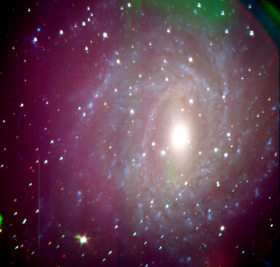 Bostrom’s idea of a ‘Great Filter’ comes from Robin Hanson (George Mason University), and consists of the kind of transition that a civilization has to endure to emerge as a space-faring culture. The key question: Is the filter ahead of us or behind? If behind, wonderful — we have already passed the test and can look with some confidence to the future. Recent work, for example, indicates that human beings were reduced to a band of as little as 2000 individuals some 70,000 years ago, near extinction. Yet somehow migrations out of Africa began 60,000 years ago, and all the tools of civilization would emerge in their wake.

Image: The galaxy NGC 6744, a barred spiral about thirty million light years from Earth. Is it possible that such vast congregations of stars may be utterly devoid of life? Credit: Southern African Large Telescope (SALT).

But that’s a filter that still gets intelligent life well on its way, and surely with the number of stars in our galaxy, that would imply at least a few civilizations should have made it through besides ourselves, their presence obvious by now. No, to explain the Fermi paradox, we would like to go further back, making the emergence of complex life of any kind problematic. Making it, in fact, so rare that a galaxy devoid of it (other than here on Earth) is an explicable outcome. That kind of filter gives us hope, because we’ve survived it even though no one else has. The galaxy may be empty of life, but it is also a vast frontier awaiting our expansion.

The Shape of Future Menace

But maybe the filter is still ahead of us. If so, we may be able to see its outline in fairly familiar terms, such as nuclear war, asteroid impact, genetically engineeered disease used as weaponry, and so on. Or maybe, and more likely, it’s something we cannot foresee:

The study of existential risks is an extremely important, albeit rather neglected, field of inquiry. But in order for an existential risk to constitute a plausible Great Filter, it must be of a kind that could destroy virtually any sufficiently advanced civilization. For instance, random natural disasters such as asteroid hits and supervolcanic eruptions are poor Great Filter candidates, because even if they destroyed a significant number of civilizations, we would expect some civilizations to get lucky; and some of these civilizations could then go on to colonize the universe. Perhaps the existential risks that are most likely to constitute a Great Filter are those that arise from technological discovery. It is not far-fetched to imagine some possible technology such that, first, virtually all sufficiently advanced civilizations eventually discover it, and second, its discovery leads almost universally to existential disaster.

Better to have the Great Filter behind us. Then, at least, we know that we are here and that the experience was survivable. And the parameters of the filter have implications for our search for life. Bostrom hopes we find no sign of life elsewhere because such a find would imply that life is commonplace, that the Great Filter kicked in after the point in evolution that that life represents. Well and good if the discovered lifeforms were simple — we could still assume the filter operated early in evolutionary history and that we are past it. But if we found complex life, this would eliminate a larger set of early evolutionary transitions as the filter, and would imply that it is ahead rather than behind us.

Remember, we are trying to explain why we are not finding signs of intelligence elsewhere, no von Neumann probes, no artifacts from civilizations that should have had plenty of time to expand through the galaxy. In Bostrom’s view, no news from the stars may actually be good news. It could imply that life itself is improbable, that the Great Filter happened well in our past and we somehow survived it, and that therefore we may be able to make the transition to a higher and better civilization. We are the one species lucky enough to make it this far, and while we cannot rule out the possibilities of other Great Filters lying ahead, we can at least hope we have weathered the worst.

All of which seems to put Earth back into the center of the universe again, a bizarre exception to the overwhelming norm. Bostrom thus has no choice but to explain the observation selection effect, a way to make sense out of our good fortune in being the lucky exception to the rule:

Into a Barren Universe

Bostrom is director of the Future of Humanity Institute at Oxford, a transhumanist philosopher (this is George Dvorsky’s description) who notes that even if the Great Filter were in our past, this would not absolve us from future danger. But this is a man who would like to see all that interesting technology, from nanotech to life extension, kicked in to provide us with a ‘posthuman’ existence whose outline we cannot presently imagine. He’s actively pulling against finding life anywhere else because he’s convinced that life’s rarity implies most organisms run into a buzzsaw before they can colonize space. We survivors, then, may find no one else to talk to, but we should have a fighting chance to use our technologies in a transformative way.

And here is where I truly disagree with Bostrom:

…surely it would be the height of naïveté to think that with the transformative technologies already in sight–genetics, nano­technology, and so on–and with thousands of millennia still ahead of us in which to perfect and apply these technologies and others of which we haven’t yet conceived, human nature and the human condition will remain unchanged. Instead, if we survive and prosper, we will presumably develop some kind of posthuman existence.

I see no evidence in history that the basics of human nature are amenable to change, whether or not such change would be a positive or negative thing. Nor can I go along with those who think we will be able to control our own evolution into some kind of higher lifeform, but long-time readers know my doubts that a genuine ‘transhumanism’ is possible to us. That would be another discussion, though, and I leave this one with the thought that if complex life of any kind is rare, we may have survived only to move outwards into an unexpectedly bleak universe.