Just how different were things in the early universe? One answer comes from a study of galaxies whose light has taken eleven billion years to reach us. In this early era — the universe would have been less than three billion years old — researchers have found galaxies so unusually compact that they compress a galaxy’s worth of stars into a space only five thousand light years across. Such objects would be able to fit into the central hub of the Milky Way. What’s more, these ultra-dense galaxies may account for as much as half the number of all galaxies of their mass that existed at this time.

“In the Hubble Deep Field, astronomers found that star-forming galaxies are small,” said Marijn Franx of Leiden University, The Netherlands. “However, these galaxies were also very low in mass. They weigh much less than our Milky Way. Our study, which surveyed a much larger area than in the Hubble Deep Field, surprisingly shows that galaxies with the same weight as our Milky Way were also very small in the past. All galaxies look really different in early times, even massive ones that formed their stars early.” 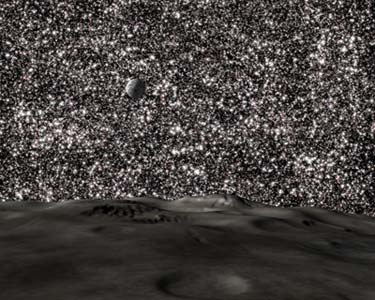 I sometimes try to imagine the scene from within a globular cluster, a sky awash with tightly packed stars. A compact galaxy must have offered any denizens of eleven billion years ago quite a view as well, as in the artist’s concept above, which shows the view from a hypothetical planet in a distant ultradense galaxy, its sky packed with thousands of stars. We would see 200 times more stars here than we see in Earth’s night-time sky. Image credit: NASA, ESA, G. Bacon (STScI), and P. van Dokkum (Yale University).

Today’s far more slowly rotating galaxies have correspondingly slower moving stars. But these early, compact galaxies show stars moving around their cores at 500 kilometers a second. The speculation now turns to just how such galaxies wound up becoming enlarged over the ensuing aeons. Galactic collisions are an obvious possibility, but there is much to learn about other processes that may have been at work, and the role of dark matter in all this may be consequential. The paper on this work goes out of its way to note that the main mechanism for moving from these early galaxies to the size and density of a more mature galaxy like the Milky Way may not have been identified.

Another wild card: The observed densities may be overestimated because of uncertainties in the analysis, about which the authors list several possibilities. Hubble’s Wide Field Camera 3, set for fall of 2008 installation via Servicing Mission 4, may be able to tighten things up. The paper is van Dokkum et al., “Confirmation of the Remarkable Compactness of Massive Quiescent Galaxies at Z ~ 1.3: Early-Type Galaxies Did Not form in a Simple Monolithic Collapse,” Astrophysical Journal Letters 677, pp. L5–L8 (April 10, 2008). Abstract available.