GLAST: Expect to Be Surprised

With the GLAST mission near launch, keep in mind the possibilities of this unique observatory in terms of findings that could revolutionize our view of distant events. GLAST (Gamma-Ray Large Area Space Telescope) will be looking at things we’ve only recently learned about, such as the enigmatic gamma-ray bursts (GRBs) now flagged by the Swift satellite and quickly pinpointed for the use of Earth-based observatories. We know we’re pushing into uncharted waters given that GLAST represents a major step forward over all previous satellites designed to study gamma ray events. And major new instruments usually deliver new classes of objects.

Because of the increase in GLAST’s sensitivity over earlier tools like the EGRET instrument on NASA’s Compton Gamma-ray Observatory (CGRO), the satellite may find thousands of new point sources. And we have plenty of questions already on the table. Gamma-ray bursts, for example, may be the result of black hole mergers, or the merger of a black hole and a neutron star. But it’s also thought that some are markers for the collapse of a massive star into a black hole. What types of stars, then, become GRB’s, and why? What is the mechanism for producing the initial gamma rays in the burst? Because GRBs seem to come in numerous varieties, their study offers fertile ground for years of research.

Or consider dark matter, the leading candidate for which is the hypothetical weakly interacting massive particle (WIMP). Gamma rays may also derive from WIMPS, which according to supersymmetry theory act as their own antimatter particles, annihilating when they interact with each other, and in the process releasing gamma rays and secondary particles. The signature of such annihilations is potentially observable with GLAST’s Large Area Telescope (LAT), assuming that dark matter is indeed composed of WIMPs. Its continuous stream of gamma rays should differ markedly from the milliseconds-to-minutes time frame of GRBs. 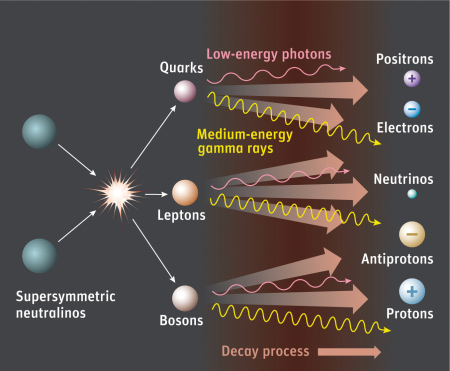 Image: According to supersymmetry, dark-matter particles known as neutralinos (which are often called WIMPs) annihilate each other, creating a cascade of particles and radiation that includes medium-energy gamma rays. If neutralinos exist, the LAT might see the gamma rays associated with their demise. Credit: Sky & Telescope / Gregg Dinderman.

One other fascinating possibility in range of this observatory is the question of the speed of light in a vacuum. The special theory of relativity pins the speed of electromagnetic radiation to 299,792,458 meters (186,282.4 miles) per second, and it would be assumed that gamma-ray photons should move at the same speed. Some models of quantum gravity, however, predict that the speed of very-high-energy gamma rays may vary slightly from other forms of light, the result of the turbulence of spacetime at quantum scales. GLAST can thus test a prediction that could nudge us, if only slightly, toward a merger of general relativity and quantum mechanics.

GLAST is now at Cape Canaveral with a planned launch in early June, having been moved to the Hazardous Processing Facility near Kennedy Space Center for fueling. I suppose it’s human nature that manned missions are what snare media attention, but this observatory may turn out to be one of the most significant we’ve launched in terms of probing out to the edges of physics and cosmology. Dark matter may not make CNN, nor will many gamma-ray bursts, but if GLAST can offer up some answers, we may get a far better read on how the universe functions, and if we’re really lucky, some clues to future propulsion possibilities.