Mention the term ‘warp drive’ and the name Miguel Alcubierre immediately comes to mind. But it was only recently that the Mexican physicist’s connection to the idea arose. His 1994 paper, written while he was at the University of Wales, took what had been a science fiction concept (most famously, I suppose, in Star Trek) and extended it into the realm of serious science. Not that Alcubierre put forth a realistic proposal for building a starship that could travel faster than light. What he was doing was the essential first step in such study, trying to demonstrate that FTL travel times could be achieved within the context of General Relativity.

You would think that flying to Alpha Centauri in, say, a few days would be a gross violation of Einstein’s laws, but this may not be the case. What Alcubierre proposed was that warp drive could function not by acceleration through space, but by the acceleration of space itself. Interestingly, while there is a seemingly iron-clad prohibition against superluminal movement through space, the movement of spacetime itself is not restricted. A warp drive could theoretically expand spacetime behind the ship while contracting it in front, allowing the vehicle to reach its destination far faster than the speed of light limitation would otherwise allow. Space itself moves around the craft while vehicle and crew remain motionless within a bubble of transient spacetime. 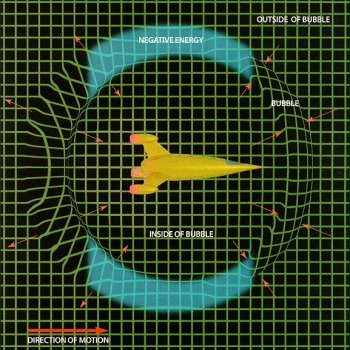 Kelvin Long, an organizer of the British Interplanetary Society’s mid-November symposium on warp drive, presented a background paper on Alcubierre at the session. He’s been kind enough to pass along a synopsis of the meeting along with an article of his that just ran in the BIS publication Spaceflight. It’s helpful to see exotic concepts like these related to more ‘conventional’ cosmology, and there is in fact a link. The accelerated expansion of the early universe — inflation — would have vastly exceeded the speed of light, and inflation, while still under active study, does offer a powerful explanation of the universe’s evolution.

Image: An Alcubierre warp drive would use negative energy to expand spacetime behind the starship while contracting it in front. Credit: David Darling/Internet Encyclopedia of Science.

The problem with warp drive in the Alcubierre manner, as Long notes, is that it seems to demand negative energy, something we know all too little about harnessing. The Casimir effect is is under scrutiny, apparently the manifestation of negative energy between two neutral, parallel conducting plates — the force attracts the plates to each other. But the effect is tiny, and the amounts we are talking about defy the imagination. Early studies of Alcubierre’s concept indicated that forming the necessary warp bubble would demand more mass/energy than was available in the visible universe, although lately things have gotten a bit more optimistic.

Long looks at calculations showing that a 100-meter warp bubble of the sort that might hold a reasonably sized starship could be achieved with a negative mass equivalent of 1065 grams. Much recent work on warp drive theory has explored how to reduce that requirement further, with an interesting 1999 paper by Van Den Broeck suggesting a way of keeping the surface area of the warp bubble microscopically small, while expanding the volume of the space inside. As the theorizing continues, Long ponders how the warp effect would be created:

If warp drive was ever possible, how one would actually create the space-time warping effect is an open issue at this time. Several ideas exist such as ‘mining’ the Zero Point Energy field or manipulating the hypothetical extra dimensions [an article in the same issue by Richard Obousy based on his own presentation at the symposium discusses this possibility]. In the end, if warp drive is ever possible, it would likely rely upon the use of massive external static structures in space to generate and shape the required negative and positive energy pulses to form the disturbed geometry. The ship would then somehow have to maintain and control this geometry whilst giving rise to the expansion and contraction effects.

All this is a tall order, but the exciting thing is that in the fourteen years since Alcubierre’s paper, work on reducing the energy requirements has continued. In fact, a robust cottage industry is beginning to spring up around warp drive study as we attempt to define what mechanism might be used for generating such a drive. These studies may well take us into the realm of as yet unknown physics — and here Long cites the elusive coupling of gravity and electromagnetism as one possibility — to show us how negative energy could be synthesized and controlled.

The papers from the warp drive symposium are slated for publication in a special edition of the Journal of the British Interplanetary Society, and I want to discuss several of them here when they run later this year, especially Richard Obousy’s attempt to link quantum vacuum energy with the cosmological constant in the context of supersymmetry. Obousy’s overview of that concept, “Creating the Warp in ‘Warp Drives,'” appears in the same April, 2008 issue of Spaceflight as Long’s article “A Theoretical Proposal for Interstellar Travel.” Those who aren’t BIS members can find Spaceflight at a good library, but here’s hoping the BIS investigates a much broader online presence for its papers!