An alternative title for Larry’s new story might be “Toward a Science of Galactic Archaeology.” For the vast cities of stars we see in the night sky are in a constant, if extremely long-term, process of re-shaping themselves through encounters with other galaxies, an activity whose traces in the distant past may still be detectable. In fact, astronomers hoping to learn more about such collisions may have a interesting remnant close at hand. As Larry writes, Omega Centauri offers some characteristics that set it apart from the average globular cluster, and point to a much different origin.

Just days ago, the team that operates the Hubble Space Telescope (HST) released a large collection of images on the eighteenth anniversary of the astronomical instrument’s deployment into Earth orbit that show dozens of galaxies doing what the team called “interactions” with each other, but which can just as easily be described as collisions.

The new Hubble images show massive islands of hundreds of billions of stars being pulled into each other by their immense collective gravities. These collisions – while causing few actual impacts between stars – reshape the merging galaxies over millions of years in a cosmic ballet that seems unbelievably slow to us short-lived humans. Billions of stars and any planets they possess are whipped about into new regions of space; many are even flung away into the intergalactic realm forever.

Our Milky Way galaxy is no stranger to such mergers. Astronomers have found the faded remains of smaller galaxies that were “consumed” by the Milky Way, their stars melting into the larger stellar population and their origins nearly obliterated by time. The Milky Way’s two major satellite galaxies, called the Large and Small Magellanic Clouds, appear to have been distorted by an ancient close passage with their giant neighbor.

In the next few billion years, as our Sun is reaching the end of its existence, our heavens will be filled with the suns of our neighboring spiral galaxy Messier 31, better known as the Andromeda galaxy, as the two stellar islands come together in their own cosmic ballet. Astronomers who recently ran computer simulations on that future merger say our Solar System – whatever is left of it by then – will be pulled even further from the Milky Way’s center, where it currently resides at a distance of 26,000 light years. As our galaxy and Andromeda take on new shapes as they move through each other (and eventually come back to form one massive elliptical galaxy) Earth’s night skies will have numerous new stars, forming constellations totally unfamiliar to the ones we know now. 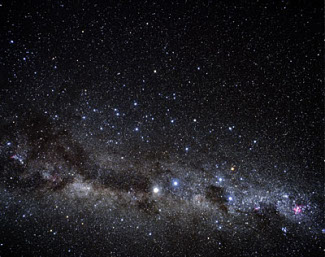 As the Hubble astrophotos and many others taken over the last century show, these galactic “interactions” have been happening since the days when galaxies first formed after the Big Bang 13.7 billion years ago. They will continue to do so for eons to come, until the last suns burn out across the Universe, leaving only clusters of dark stellar remnants, immense black holes, and dust. And one of them may be closer than we think, with new evidence that a long-recognized star cluster residing inside the Milky Way may actually have been an independent galaxy in the distant past.

Image: This image shows the southern Milky Way patch. At the centre is the constellation Centaurus, where the globular cluster Omega Centauri is located. Credits: A. Fujii.

The stellar group in question is known as Omega Centauri, a massive collection of over ten million suns roughly 18,000 light years from our planet, visible to unaided vision from Earth’s Southern Hemisphere. Ancient astronomers of the pre-telescopic era recorded Omega Centauri as a star. English astronomer John Herschel was the first to label it as a globular star cluster in the 1830s, the category it has since retained.

Despite the designation, Omega Centauri has never quite fit in with the rest of the 150 or so known globular star clusters that encircle the Milky Way like moths around a flame. In addition to having ten times more stars than the average globular cluster, these same suns are also of diverse ages and types, whereas most stars in a typical globular cluster are all roughly the same. These facts, along with Omega Centauri’s chemical makeup and its path through the Milky Way, have been making astronomers suspect the cluster was once something even larger and more magnificent long ago, until its fateful meeting with our galaxy.

A paper released this month by scientists from HST and the Gemini South Observatory in Chile has added an important discovery to this theory: A rare intermediate black hole dwelling at the heart of the star cluster.

By monitoring the motions of suns near the core of Omega Centauri, the astronomers determined that a very heavy object had to exist at the celestial object’s center: The remains of a massive star that collapsed upon itself to form a gravitational “pit” in space 40,000 times more massive than our Sun. While this is much smaller than the black hole at the center of our Milky Way, which weighs in at four million solar masses, team member Karl Gebhardt noted there is “only one [other] example of an intermediate-mass black hole – in the globular cluster G1, in the nearby Andromeda galaxy.” 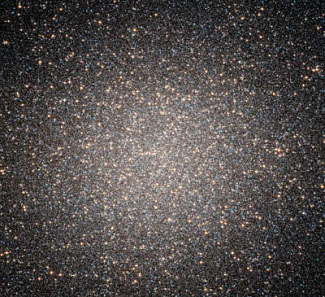 Omega Centauri may indeed have once been what astronomers call a dwarf galaxy, until the star island was essentially consumed by the Milky Way as it drifted through intergalactic space. The outer suns of Omega Centauri were likely stripped away by our galaxy as the two bodies merged, which made the dwarf galaxy end up appearing like a globular cluster. However, Omega Centauri was still massive enough to retain many of its stars closer to its center, thanks in no small part to its black hole, thus remaining much larger than the average globular cluster.

Image: A new discovery has resolved some of the mystery surrounding Omega Centauri, the largest and brightest globular cluster in the sky. Results obtained by Hubble and the Gemini Observatory reveal that the globular cluster may have a rare intermediate-mass black hole hidden in its centre, implying that is likely not a globular cluster at all, but a dwarf galaxy stripped of its outer stars. Credits: NASA/ ESA/ STScI/ AURA (The Hubble Heritage Team).

Having an actual galaxy so relatively close for astronomers to study will provide new information on the nature of the 100 billion stellar islands that populate the known Universe. This data should reveal how galaxies form and the role that the massive black holes which reside in most galactic cores play in their births.

The paper is Noyola et al., “Gemini and Hubble Space Telescope Evidence for an Intermediate Mass Black Hole in Omega Centauri,” accepted by the Astrophysical Journal and available online.