Birth of a Supernova

If the pace of discovery seems to be accelerating, that’s surely because of the network of tools we’re putting into place, able to work with each other both in space and on the ground to ferret out new information. Thus the collaborative effort that followed the remarkable observation of a new supernova, one caught so early in the process that it was found before visible light from the blast had begun to become apparent.

We have such tools as the Swift satellite to thank for this. Its ongoing observations of a supernova in the spiral galaxy NGC 2770, ninety million light years from Earth in the constellation called the Lynx, caught a three-minute, 40 second x-ray burst from the same galaxy, another supernova in the process of happening. What Swift seems to have uncovered was the shock wave of kinetic energy heating gas in the star’s outer layers to the temperatures that produce X-ray emissions. Such an event would be undetectable at optical wavelengths, which is where most supernovae have thus far been discovered.

Swift’s job is to use its wide-angle instruments to target interesting phenomena like the supernova now known as SN 2008D, at which point it puts other, more sensitive instruments on the alert. Both Hubble and the Chandra X-ray Observatory went to work, but so did numerous sites on Earth, including the Very Large Array, the Palomar Observatory, the Keck I telescope in Hawaii and too many others to list here. 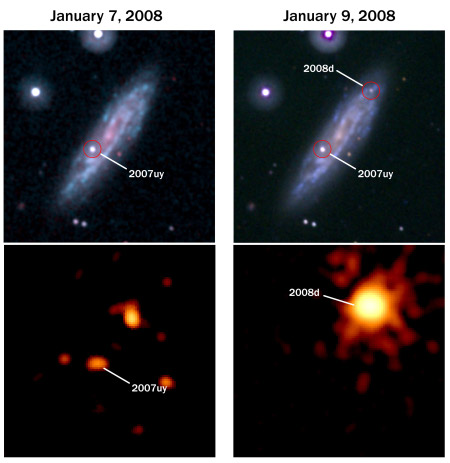 Image: Scientists had planned on studying Supernova 2007uy in the galaxy NGC2770, which was already several weeks old when seen in this visual, ultraviolet image (upper left) taken on January 7, 2008, by NASA’s Swift satellite. A close-up, X-ray image of that supernova is beneath. At the right, you can see SN 2008D, shown in ultraviolet imagery (top) and at X-ray wavelengths (below). Credit: NASA Swift team.

Alicia Soderberg (Princeton University), leader of the team studying this event, calls the new supernova “…the Rosetta stone of supernova studies for years to come,” a reasonable statement given that the ‘shock breakout’ of X-rays, triggered by the compression and ensuing rebound of the newly formed neutron star produced by the massive star’s collapse, has never been observed before. The team’s paper on the event shows that the energy and pattern of the X-ray burst are consistent with its origin in the exploding star. And note this:

“A fascinating conclusion from the theoretical modeling of this outburst is that a thin outer layer must have been ejected at velocities up to about 70-percent the speed of light. This speed is much higher than previously known for the bulk of the stellar envelope, which moves at only up to 10-percent the speed of light,” said Peter Meszaros, Holder of the Eberly Family Chair in Astronomy and Astrophysics and Professor of Physics at Penn State and leader of the theory team for Swift. “The relatively higher-energy X-rays observed can now be understood as the usual optical photons emitted by the supernova being boosted up to X-ray energies as they are batted back and forth between the slower envelope and the faster outer shell.”

Thus we gain plentiful data about how supernovae occur, which should help us tune the existing model. Current thinking is that stars far more massive than the Sun produce supernova explosions when they exhaust their resources for thermonuclear reactions. When the core of the star stops producing the needed energy, the core collapses, causing the rebound that blasts stellar materials into space. Either a neutron star or a black hole is left behind. If most supernovae show an X-ray outburst like this one, hundreds should be detectable per year with the space-based instruments we currently have in the planning stage.

And here’s something I didn’t know: Ninety-nine percent of the energy of a supernova is carried away in the form of neutrinos (this is from David Pooley at the University of Wisconsin-Madison). Pooley leads a quick-reaction team for the Chandra X-ray Observatory program and is one of the authors of the paper on this work. He sees our ability to study future supernovae as useful for future instruments like the IceCube neutrino detector being built at the South Pole. “If we have better and more accurate knowledge of when and where these happen, that would let an instrument like IceCube be more sensitive,” says Pooley.

Which could offer a natural segue into the uses of neutrinos, but I’ll put that discussion off until tomorrow. For now, the supernova paper is Soderberg et al., “An extremely luminous X-ray outburst at the birth of a supernova,” Nature 453 (22 May 2008), pp. 469-474. Available online.