It’s not my usual practice to begin a post with a quotation, but Lee Billings, writing in a recent essay for SEED Magazine, so precisely captures an essential truth about our future in space that I want to give it pride of place. Looking at the ways we search for life on planets around other stars, Billings says this:

Throughout history, our knowledge has grown through human ambition and curiosity, only to regress beneath human apathy and caprice. The greatest obstacle to efforts to find another Earth, to discover life elsewhere in the universe, isn’t some flaw in our methodology or our technology, but in our will. Most of us alive today are unlikely to see these efforts bear their fullest fruit. Even optimistic young astronomers are uncertain that they will see the light from other living worlds in their careers, or even their lifetimes. But they work as though they will. Whether they see it personally doesn’t matter; what matters is that these other planets be seen someday. In preparation for that day, they continue to send modern-day robotic voyagers, like NASA’s EPOXI spacecraft, to gaze at our own planet from deep space, while still searching, as EPOXI also does, for planets elsewhere.

EPOXI is one of two extended missions for NASA’s Deep Impact spacecraft, the one that made such a splash when its impactor crashed into comet Tempel 1 back in 2005. The mission target is five nearby stars with transiting exoplanets, known ‘hot Jupiters,’ and the idea is that there may be other worlds in the systems around these stars. In fact, says EPOXI deputy principal investigator Drake Deming (NASA GSFC), “We’re on the hunt for planets down to the size of Earth, orbiting some of our closest neighboring stars.”

You heard what the man said: Planets down to the size of Earth. 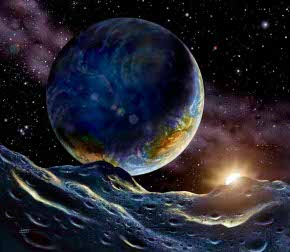 Long-term thinking is always a tough sell, particularly in an age as frenetic as ours, but missions like EPOXI fit into the gradual accretion of exoplanetary knowledge that will build the foundation for far more remarkable discoveries. And Billings is right on target here: The stars demand better of us than a fixation on quick results. Wonderful if we do get them, but budgetary and technological realities may push the definitive discovery of life around another star into an ambiguous future.

Image: A terrestrial planet around another star as seen from one of its moons. Artist impression by David Hardy.

Nonetheless, in whatever time frame, it’s coming. Billing’s essay considers the staggering possibilities of analyzing distant points of light, the planetary specks revealed by future space observatories that can block out the light from a central star to reveal the system around it. Recent work by Darren Williams (Penn State, Erie) and Peter McCullough (Space Telescope Science Institute) suggests that patterns of reflected light might reveal planetary seas and the continents that interrupt their signature. Sara Seager (MIT) and Eric Ford (University of Florida) are working on the analysis of color, studying fluctuations in brightness as indicators of days and seasons.

Fold this work in with spectroscopy, and you’re starting to characterize a terrestrial-class world to a hitherto impossible degree of precision. Ozone is one kind of marker, revelatory of oxygen, the latter being so chemically reactive that it needs sources of renewal. Couple it with methane and you’re looking at two gases that shouldn’t co-exist for long periods. The Galileo spacecraft saw such a signature when it made an Earth flyby in 1990 on its way to Jupiter. You can read about the ‘astrobiological’ investigation of Earth in Carl Sagan’s Pale Blue Dot (1994), the point being that our planet offers an initial sample to submit to analysis like that we’ll one day run on a real exoplanet.

The myriad ways we can find life’s signature are growing as our instrumentation improves in sophistication, and it may well be that we eventually have methods — doubtless using some kind of interferometry, so that widely spaced observatories become the equivalent of a single instrument — that can actually pull up imagery from a distant world. One of Webster Cash’s most advanced designs for a ‘starshade’ mission is theoretically capable of showing us a planetary surface from the equivalent of a few hundred miles out, but that particular New Worlds off-shoot would be an expensive culmination of decades of previous, less powerful missions. Step by step, stone by stone, we build the edifice.

Handing Off the Gift 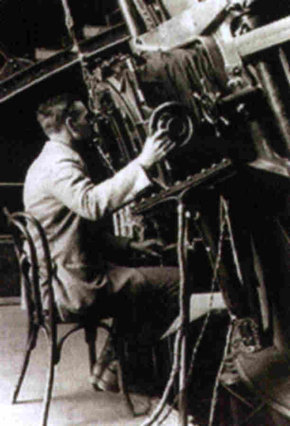 So that when Billings talks about researchers not knowing whether they will see the results of their work, he’s noting that no matter what we live to see (and we will see wonders), the push into the universe will reveal far more to ensuing generations. We build the things we build not only for what they show us today, but because they are stepping stones in the journey to build the next class of tools. The Hubble Space Telescope is a grand instrument, but you don’t get Hubble before building Galileo’s simple telescope first, or Mt. Wilson, or the Yerkes Observatory refractor. That means recognizing that we’re part of a larger scientific enterprise, one before which individual ego (sometimes potent!) is dwarfed by the need to defer to a vision centered on our entire species.

Image: Building up the edifice: Edwin Hubble at the Mt. Wilson 100-inch instrument. The photographic plates the astronomer created here helped him demonstrate the nature of galaxies in the Local Group.

I’m sometimes asked why I’m so provincial in talking about biosignatures for life like our own, when around other stars the possibilities may be far beyond our imagining. And that’s just the point, I think. The Galileo mission’s Earth fly-by drove home the idea that finding life is hard even when you’re dealing with a known entity like our green world. The best shot we have in the early going is to look for life that we already understand, carbon-based, dependent upon water and the chemical signatures we would expect to find where such life flourishes. Are other life-forms out there? Possibly, and we may just find them — in the long-term, after building the edifice higher still, and handing off our work to generations that will recognize and improve the gift yet again.