If you want to understand the size of the Milky Way, you have to know something about how fast stars move. Measuring the velocities of stars in the galaxy’s stellar halo — a spherical halo of old stars and globular clusters surrounding the disk — you can figure out the mass of the whole by examining the gravity needed to keep these stars in their orbits. The Milky Way’s stars are a part of that mass, of course, but so is the extended distribution of dark matter, about which we know all too little.

This is where the so-called ‘blue horizontal branch’ stars (BHB) come into play. These ancient objects have evolved past their red giant phase and now burn helium. Because they tend to be both distant and bright (BHB stars are generally of spectral class B or A), they make useful markers for measuring stellar velocities out to a distance of 180,000 light years from the Sun, far beyond the confines of the primary galaxy. The huge star survey called SEGUE (a part of the Sloan Digital Sky Survey) has been using 2400 BHB stars to take such readings.

The results suggested by the observed stellar velocities: The Milky Way is not as massive as we believed. So says team leader Xiangxiang Xue (National Astronomical Observatories of China):

“The Galaxy is slimmer than we thought. That means it has less dark matter than previously believed, but also that it was more efficient in converting its original supply of hydrogen and helium into stars.” 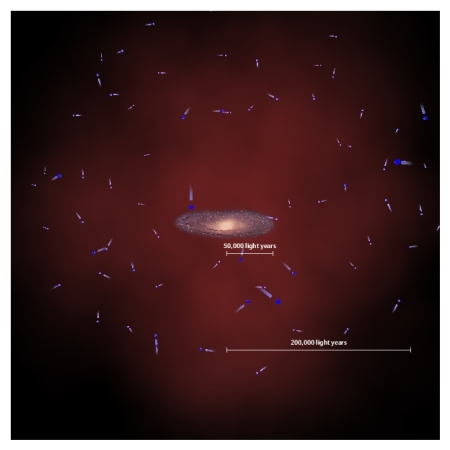 Image: Our sun lies about 25,000 light years from the center of the Galaxy, roughly halfway out in the Galactic disk. The new mass determination is based on the measured motions of 2,400 “blue horizontal branch” stars in the extended stellar halo that surrounds the disk. These measurements reach distances of nearly 200,000 light years from Galactic center, roughly the edge of the region illustrated above. The visible part of our Milky Way is embedded into its much more massive and more extended dark matter halo, indicated in dim red. The ‘blue horizontal branch stars’ that were found and measured in the SDSS-II study are orbiting the galaxy at large distances. Credit: Axel Quetz, Max Planck Institute for Astrophysics (Heidelberg), SDSS-II Collaboration.

The findings are useful because SEGUE’s large sample allows the method to be calibrated against existing computer simulations, giving us a better understanding of the Milky Way’s total mass. How the galaxy compares to distant galaxies that we see from without rather than within is a study that can help us in the quest to understand the broader principles of galactic formation. Just as significant, such work offers a valuable perspective on how the visible galaxy interacts with its dark matter halo.

More in this Sloan Digital Sky Survey news release. The paper, due to run in the Astrophysical Journal this fall, is Hue et al., “The Milky Way’s Circular Velocity Curve to 60 kpc and an Estimate of the Dark Matter Halo Mass from Kinematics of ~2500 SDSS Blue Horizontal Branch Stars,” available online.