Hunting ETI on the Ecliptic

Imagine a team of astronomers from a distant extraterrestrial civilization. Anxious to find blue and green living planets like their own, they study various methods of planetary detection and put them to work on small, relatively nearby stars. Detecting planetary transits, they refine their techniques until they trace the signature of a planet much like home.

Now assume that, despite the presence of their own version of skeptics like myself (some of us think that sending deliberate signals to the stars is premature without further, wider discussion), they decide to encode information about themselves into a message to be sent by a repeating beacon. Naturally, they turn to those stars around which they’ve found planets that look to be not only the right size, but in the right position, within the habitable zone where water could exist on the surface.

Fanciful? You bet, especially in the idea that a nearby extraterrestrial civilization would be more or less at the same state of technological development as ourselves. But maybe they’re not. Maybe they made this detection aeons ago, and have been signaling ever since in the hope that a civilization would arise. Without knowing more about what’s out there, we can’t rule scenarios like this out. And if you take a step in the other direction, you can see that there are SETI applications here on Earth. Hunting for other civilizations might depend upon their being a bit like us.

After all, we’ve always tried to figure out where to search, which is why so much attention has historically been paid to factors like the most obvious frequency for transmissions. Now Richard Conn Henry (Johns Hopkins) looks in at our Solar System from the outside, telling the recent American Astronomical Society meeting that our SETI search should focus on the swath of sky within which an alien civilization might be able to detect the Earth as it makes its own transit across the face of our Sun. 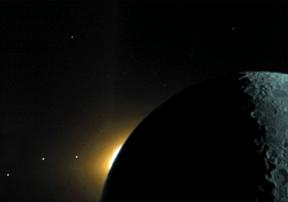 Henry is talking about the ecliptic, which is the plane of the Earth’s orbit around the Sun. As we see things from Earth, the Sun seems to move along this circle each year. Taking up just three percent of the sky, the ecliptic usefully constrains the area that observatories like the Allen Telescope Array (ATA) would have to examine. Henry puts the matter concisely:

“If those civilizations are out there — and we don’t know that they are — those that inhabit star systems that lie close to the plane of the Earth’s orbit around the sun will be the most motivated to send communications signals toward Earth, because those civilizations will surely have detected our annual transit across the face of the sun, telling them that Earth lies in a habitable zone, where liquid water is stable. Through spectroscopic analysis of our atmosphere, they will know that Earth likely bears life.”

Image: The plane of the ecliptic is illustrated in this Clementine star tracker camera image which reveals (from right to left) the Moon lit by Earthshine, the Sun’s corona rising over the Moon’s dark limb, and the planets Saturn, Mars, and Mercury. The ecliptic plane is defined as the imaginary plane containing the Earth’s orbit around the Sun. In the course of a year, the Sun’s apparent path through the sky lies in this plane. The planetary bodies of our solar system all tend to lie near this plane, since they were formed from the Sun’s spinning, flattened, proto-planetary disk. The snapshot above nicely captures a momentary line-up looking out along this fundamental plane of our solar system. Credit: NASA/The Clementine Project.

Yes, and making smart decisions about how you allocate your observing time could spell the difference between a hit and a miss. If you look at the ecliptic in relation to the galactic plane, the two circles intersect in the region of Taurus and again in Sagittarius, the implication being that these are the most likely regions for finding an extraterrestrial civilization. Assuming long life to civilizations, a factor Henry goes on to investigate:

“These models are nothing but pure speculation. But hey … it is educational to explore possibilities. We have no idea how many — if any — other civilizations there are in our galaxy. One critical factor is how long a civilization — for example, our own — remains in existence. If, as we dearly hope, the answer is many millions of years, then even if civilizations are fairly rare, those in our ecliptic plane will have learned of our existence. They will know that life exists on Earth and they will have the patience to beam easily detectable radio (or optical) signals in our direction, if necessary, for millions of years in the hope, now realized, that a technological civilization will appear on Earth.”

Henry joins Seth Shostak (SETI Institute) and Steve Kilston (Henry Foundation) in using the Allen Telescope Array to perform this search. Ultimately, the entire ecliptic will be investigated through the ATA, but the intersection of ecliptic and galactic planes does present an area of unusual interest. We’ve long known that this area could be interesting, but the ATA’s hundreds of dishes and computer processing capabilities offer a significant upgrade to our search methods. Count me a SETI skeptic, at least in terms of finding intelligent life via radio signals, but count me, too, as one who would rejoice at being proven wrong.