When it comes to SETI investigations, the Low Frequency Array (LOFAR) being built in Europe offers intriguing possibilities. With a plan to encompass roughly 25,000 small antennae, arranged in clusters spread out over an area 350 kilometers in diameter, LOFAR may prove sensitive enough to detect the radiation leakage of transmitters in the radio and television bands from extraterrestrial civilizations. The array will operate between 10 and 240 MHz. When completed, it will offer not only myriad astronomical possibilities but SETI opportunities with a difference.

“LOFAR can extend the search for extra-terrestrial intelligence to an entirely unexplored part of the low-frequency radio spectrum, an area that is heavily used for civil and military communications here on Earth. In addition, LOFAR can survey large areas of the sky simultaneously – an important advantage if SETI signals are rare or transient in nature.”

This story has a particular resonance for me. Back in the 1970’s, I put together a shortwave listening post that had it all — three receivers, including radioteletype capability, and all sorts of filters and peripheral equipment. I loved DXing the tropical bands, my specialty, looking for faint Indonesian local stations that would drift into the eastern US usually around sunrise for their brief window of receivability. In the evenings, I would hunt unusual, low-power South American stations, including the holy grail for shortwave listeners, the Falkland Islands, a fabulous catch that only a few old hands had made (I never did log the Falklands).

Even harder to get was Tristan da Cunha — I knew of no one other than a few South African DXers who could lay claim to that one. It occurred to me one night as I was logging a new station in my book that the right kind of equipment might catch a signal from another star. Back then, knowing little about these matters, I just assumed that signal would be a radio or TV signal, and that we would be listening in to the traffic of a civilization not so different from our own. I pondered what kind of antenna it would take, and wrote a speculative piece called ‘Where the Real DX Is’ for Glenn Hauser’s Review of International Broadcasting.

LOFAR’s frequency range covers areas I used to scan, but no one today is as naive as I was about expecting other civilizations to be like ours. But whatever we find, a SETI attempt via LOFAR is worth doing. Sure, nearby civilizations would be unlikely to be at the same level of electromagnetic development — radio and TV — that we are. On the other hand, it seems reasonable to search broadly through the spectrum in case we’re missing something obvious. It’s not as if SETI is LOFAR’s raison d’etre, but making researchers aware of SETI possibilities is only common sense. 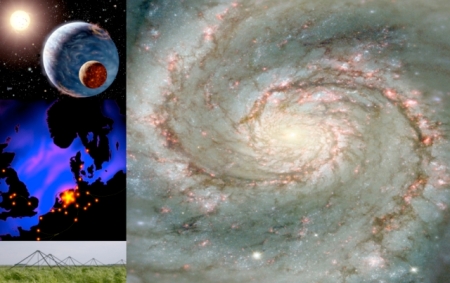 So what is LOFAR about? The plan is to survey the universe with higher resolution and sensitivity than any previous surveys at these wavelengths, mapping everything from the reionization of hydrogen in the early universe to the formation of galaxies and the clusters that house them. Throw in the distribution of cosmic rays, the study of pulsars and transient events of all descriptions and you have an observatory that deepens our understanding in these frequency ranges and is certain to make serendipitous discoveries.

Image: A typical galaxy like the Milky Way contains as many stars as there are grains of sand on all the worlds beaches. Most of these stars have planetary systems and many will have the right conditions for life to flourish. LOFAR can potentially search for artificial radio signals from intelligent civilizations in nearby stellar systems. Credit: LOFAR.

Serendipity as in the discovery of ETI? LOFAR’s SETI potential has been under discussion in the Netherlands this past week at a workshop held in Dwingeloo. With stations spread throughout northern Europe, the observatory will be inspiring various SETI observing proposals as the project’s Phase I progresses to full capability. Prepare for the unexpected, even if it’s not the signature of an extraterrestrial transmitter. Every time we push into higher-resolution instrumentation or look at the universe in less studied wavelengths, something unusual tends to happen. Who knows what LOFAR’s version of gamma-ray bursts may turn out to be?

Next post: Solar Sail Mission to the Sun’s High Latitudes