We know that organic compounds have been found in meteorite fragments. But are they truly extraterrestrial, or the result of contamination here on Earth? The subject, always controversial, has been given new impetus by a paper that points to the former, with interesting ramifications. Did life begin on Earth or was the Earth seeded by life from the cosmos? Or perhaps a third alternative exists, with pre-existing life influenced by infall from outer space. If we can build a viable case for the latter two possibilities, we can build one just as viable for planets around a wide variety of stars, giving the idea that granted enough time, life of some kind may become ubiquitous a most interesting boost. 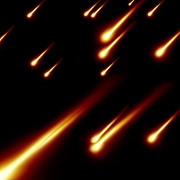 The scientists involved have been working with fragments of the Murchison meteorite, which fell in 1969 about 100 km north of Melbourne, Australia. Quite a bit of material — over 100 kg — could be recovered, enough for batteries of subsequent tests and the discovery of various amino acids, some common, some unusual. The most recent work finds the molecules uracil and xanthine in Murchison fragments. These are nucleobases, or precursors to the molecules that make up RNA and DNA.

Moreover, they’re found to contain a heavy form of carbon that the team believes could only have been formed in space. And that takes us to some interesting places. Here’s Mark Sephton (Imperial College London), a co-author of the paper on this work, on the possibilities:

“Because meteorites represent left over materials from the formation of the solar system, the key components for life — including nucleobases — could be widespread in the cosmos. As more and more of life’s raw materials are discovered in objects from space, the possibility of life springing forth wherever the right chemistry is present becomes more likely.”

That ‘right chemistry’ is an interesting thing indeed. Accept the idea that the first living organisms on Earth emerged as the result of the chemistry of early organic compounds. Just how that process proceeded is hidden from us by subsequent geological activity, not to mention the bombardment of the planet between 3.8 and 4.5 billion years ago. But the materials involved in the Earth’s formation can be studied in objects like the Murchison meteorite. Carbonaceous chondrites like this are a class of primitive meteorite that contains compounds conducive to life. They offer a snapshot of the organic chemistry that suggests how life began.

The effects of the heavy bombardment all those billions of years ago in jump-starting life on this planet are becoming better understood through finds like these. And they do suggest that we live in a cosmos that keeps trying to get life started wherever conditions are right. Couple that with the discovery (within a few years, surely) of Earth-mass planets in the habitable zones of other stars and the outlook for finding signs of life in future terrestrial planet hunter missions looks brighter and brighter.