Physical Constants in the Cosmos

Have the laws of physics stayed the same throughout the history of the cosmos? It’s an interesting question because even minute changes to physical constants could imply the existence of extra dimensions, of the sort posited by string theorists. But that’s a big ‘could’, because despite earlier controversial findings, at least one cornerstone constant — the ratio of a proton’s mass to that of an electron — looks to be exactly the same in a galaxy some 6 billion light years away as it is when we measure it on Earth. A study led by Michael Murphy (Swinburne University) presents the result in a recent issue of Science.

The constant, known as mu, determines the value of the strong nuclear force, so it has everything to do with how atomic nuclei hold themselves together. No one can say why the mass of a proton should be 1836 times that of an electron. All we know is that it is. To be more precise, the value is 1836.15. The recently published research studied light from the quasar B0218+367, examining how it was partially absorbed by ammonia gas in an intervening galaxy on its way to Earth-based astronomers. It’s a useful measurement because the wavelengths at which ammonia absorbs energy from the quasar turn out to be quite sensitive to mu.

Take a look at the image below to get an idea of how key gravitational lensing has proven to be in this work. The quasar B0218+367 is about 7.5 billion years away. Two things are happening to its light as it moves toward us. First, its wavelength is being stretched, making it redder the farther it travels. And usefully for us, the light is being gravitationally lensed by the intervening galaxy six billion light years away. The result: Two quasar images and one extremely helpful set of data. 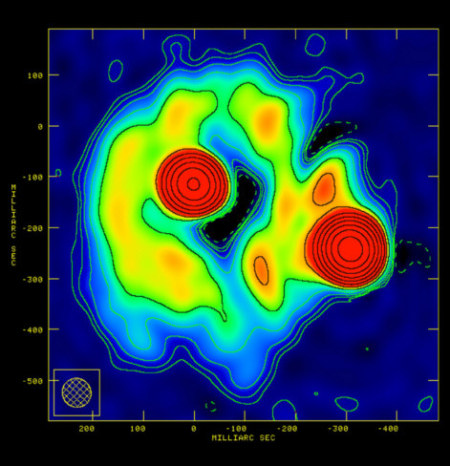 Image: Radio contour map of the quasar B0218+367 at about 7.5 billion light years distance. The galaxy containing absorbing ammonia molecules lies about 6 billion light years away and, though it is not seen in this radio map, gravitationally lenses the background quasar light to produce two bright quasar images on the sky (big red circles). The physical size of the image (at the distance of the absorbing galaxy) is about 19,000 light years across. Credit: Andi Biggs (MERLIN Image).

Christian Henkel (Max Planck Institute for Radio Astronomy) sees a clear result: “By comparing the ammonia absorption with that of other molecules, we were able to determine the value of the proton-electron mass ratio in this galaxy, and confirm that it is the same as it is on Earth.”

While we tend to assume that the laws of physics are the same everywhere, it’s an assumption that has to be verified by observations of different times and places in the cosmos. For that matter, the four fundamental forces of nature — gravity, electromagnetism, and the strong and weak nuclear forces — can’t be predicted from our theories, but can only be measured by experiment. That points to a major hole in our understanding of how physical constants govern the universe.

Finding out whether these constants remain the same is a prerequisite for deepening our understanding of how they emerge. And despite the earlier claim (in a Dutch study of 2006) that small differences in mu were observable, this new work is the first to use ammonia molecules, which turn out to be ten times more sensitive than any previous method (the Dutch team used molecular hydrogen). What’s next is to move the investigation beyond the confines of a single galaxy to weigh the value of mu in other eras, but as the details of the lensing involved in this experiment make clear, finding the right targets is a significant challenge.

Next post: Planet Formation Around the Sun’s Dusty Disk