The dusty disks around other stars can tell us much about how planets form, creating a catalog of systems in various stages of development. But some of the best evidence for our own system’s formation has to be dug out of the ground. It’s based on the chondrules found in certain meteorites that seem to have been formed in the earliest stages of its life. They’re small, round objects about a millimeter in size, made of glass and crystal and thought to have been formed by the flash heating of dust. We’re talking major heat here, up to 2000 degrees Celsius. 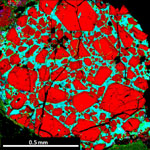 A new study of chondrules is unusual because it finds higher levels of sodium than ought to be there. That’s problematic because the heat of chondrule formation, under existing theories, should have boiled off volatile chemical elements. Here’s Conel Alexander (Carnegie Institution) on the matter:

“Chondrules formed as molten droplets produced by what was probably one of the most energetic processes that operated in the early solar system. You would expect all the sodium to evaporate and be lost from the chondrules under such conditions. Instead, the sodium was retained. The chondrules stayed as effectively closed systems throughout the heating and melting.”

What does the sodium mean? Only if the chondrule formation took place in a far denser dust cloud than we had previously imagined could this element have been retained. The researchers are talking about a dust density at least one hundred times the densities previously considered. At that density, intriguing small objects begin to form, collapsing under their own gravity. Chondrules, in other words, may have been linked to the formation of planetesimals, the kilometer-sized objects that are the precursors to larger, rocky planets like our Earth.

The picture that emerges is one that can only be filled out by future work on how dust grains evolve into the clumps that become planetesimals. Huge issues remain. What was the cause of the heating that produced the chondrules in the first place? Note too that the team sees chondrule formation occurring only in small regions of the solar nebula, those with the highest densities of solids. If their theory is correct, this should explain how materials that were not processed the way the chondrules were can show up in the same chondritic meteorites. Here the mechanism seems reasonable, if highly complex. Quoting from the paper:

Given the high densities of solids, it is likely that whatever event was responsible for chondrule formation would have processed solids in that region to a different extent than materials further away… [A] low velocity shock ( 2-3 km/s) could suffice to melt the chondrules in the very dense clump, but minimally process materials outside the clump, allowing pre-solar grains or CAIs [calcium-aluminum-rich inclusions] located thousands to ten thousands of kilometers away to show no signs of thermal processing. If the chondrules then become gravitationally bound after their processing (due in part to the increased density that accompanies processing in shock waves) they will contract on timescales of a few orbits. This would allow the unprocessed materials to diffuse into the self-gravitating clump before it completely collapses.

Untangling that process is going to be no easy matter, but the presence of chondrules making up between twenty to eighty percent of this class of meteorite tells us their mixing with volatiles like sodium must be explained. So that primordial dust cloud must have had patches of considerable density, perhaps a clue as we try to identify other infant disks that may evolve into systems like our own. The paper is Alexander et al., “The Formation Conditions of Chondrules and Chondrites,” Science Vol. 320. No. 5883 (20 June 2008), pp. 1617-1619 (abstract).