100th Anniversary of a Cosmic Warning

“Suddenly in the north sky… the sky was split in two, and high above the forest the whole northern part of the sky appeared covered with fire… At that moment there was a bang in the sky and a mighty crash… The crash was followed by a noise like stones falling from the sky, or of guns firing. The earth trembled.” So wrote a witness — fully forty miles away from the event — of the Tunguska impact of 1908, whose 100th anniversary is today. As Larry Klaes notes, small bodies still undetected by astronomers could pose the threat of another Tunguska, making the hunt for Earth-crossing objects a matter of high importance not just for science but planetary security.

Across the many billions of miles of space that our Solar System occupies in its small piece of the vaster Milky Way galaxy, the most numerous members of our celestial neighborhood by far are the comets, planetoids, and meteoroids.

Although much smaller than the Sun, the major planets, and many of the attending moons of the largest worlds, comets and planetoids can be found by the billions from inside the orbit of Mercury to halfway to the next star system, Alpha Centauri. The vast majority of comets occupy the utterly dark and cold outer realms of the Solar System past Neptune, the last and smallest of the giant planets. Comets are the icy remains of the birth of our Solar System roughly five billion years ago. Most planetoids can be found scattered between the orbits of Mars and Jupiter. These rocky bodies represent worlds that could never form into anything grander due to the massive, disrupting presence of Jupiter from the earliest days of our star system. Meteoroids are the scattered remnants of planetoid collisions, ranging in size from boulders to dust; they can be found in virtually every corner of the Solar System.

Like most things in reality, though, not everything in the Solar System stays in one neat area, especially over the vast stretches of time that our system has existed. Many comets have been perturbed from their distant orbits into new ones which cause them to venture into the inner Solar System. Some comets make briefs visits and then head back out into the blackness, not to be seen again for many centuries. Others plow directly into the Sun, while some get “caught” just right and end up in new, smaller orbits that cause these icy worldlets to return to our region of space in mere decades. Halley’s Comet is perhaps the most famous example of what astronomers call a short-period comet: Last visiting Earth in 1986, Halley’s Comet will come around again in 2061. Planetoids have also been knocked about through the ages, being whipped around by each other and larger worlds, or smashing together and subsequently finding themselves in different shapes and sizes along new circuits about the Sun. 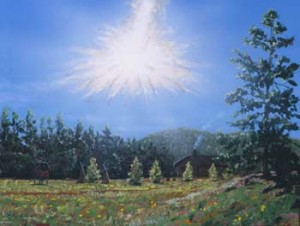 Though aware of comets and planetoids for centuries, it has only been in the last few decades that astronomers and others have begun to take seriously the remote but definite possibility that some of these “rogue” objects could one day collide with our planet Earth. While our actual world could survive an impact with these much smaller celestial bodies, it would be another story for most of the life existing on the crust of this planet. The 160 million-year reign of the dinosaurs came to an abrupt end 65 million years ago when a chunk of ancient space debris a mere five miles across slammed into Earth. Earlier epochs may have seen even more organisms rendered extinct by similar celestial impacts.

Image: Space debris is by no means a thing of the past. This artist’s conception shows the moment of explosion of a huge space rock that shattered trees throughout a large section of Siberia in 1908. Events of this magnitude are thought to occur approximately every 300 years. Credit: William Hartmann.

For those who might think that destructive collisions between our planet and a comet or planetoid happen too seldom to be of much concern for humanity and the rest of Earth’s biosphere, one should take note of an important anniversary in astronomical history which took place one century ago.

In the early morning of June 30, 1908, a huge ball of light almost as bright as the Sun was seen moving across the sky over a remote region of Siberia. The strange object was a piece of a comet or planetoid perhaps the size of a ten-story building streaking through Earth’s atmosphere at tremendous speed.

Suddenly the space visitor violently broke apart several miles above the ground near the Podkamennaya Tunguska River with a force estimated at one thousand times greater than the explosion of the atomic bomb dropped on Hiroshima, Japan in 1945. Eighty million trees for 830 square miles around the detonation zone were flattened. The ground shook like an earthquake and the resulting shock wave caused people living miles from ground zero to be knocked off their feet.

This cosmic impact, which became known as the Tunguska Event, is one of the earliest instances which made people aware of the fact that not everything plunging in from space is either a harmless and pretty meteor shower of particles no bigger than dust or a larger yet still “safe” rock or boulder known as a meteorite. Had the object which created the Tunguska Event landed on a major city instead of a remote forested region of Earth, the unfortunate urban center would have suffered major damage and a high loss of life. If a Tunguska Event happened today in either a rural or urban area, the explosion might be interpreted as a nuclear attack, with potentially deadly consequences for all humanity from the response to such a “message” from the Universe.

Image: A Russian expedition to the Tunguska site showed what the scene looked like fully twenty years after the event. The expedition, led by Leonard Kulik, discovered that the pattern of fallen trees pointed to an explosion caused by a meteorite, but Kulik found no fragments of the object. It is now believed that the Tunguska asteroid, about 36 meters across, exploded some 28,000 feet up in the atmosphere.

Of greatest concern to scientists, political leaders, and others is the random space object miles across with an orbit that may one day intersect our planet on its path around the Sun. Thanks to the diligence of various professional groups over the last decade, thousands of Near Earth Objects (NEOs) have been found and their orbits calculated.

The majority of these bodies pose no threat to us and our planet for the foreseeable future. However, the orbits of a few NEOs are still not known with enough certainty to remove them from the list of potentially deadly space rocks just yet. Additionally, there are quite a few smaller bodies roaming the Solar System that remain undetected by astronomers, any of which could one day cause destruction to our world on a Tunguska level or worse.

Facilities like the Cornell-run Arecibo Radio Observatory in Puerto Rico remain at the forefront in helping scientists to understand the makeup of these NEOs and how to deal with them in case one does have Earth in its sights some day. The continued existence of Arecibo and other science facilities may become the difference between a thriving future for humanity or extinction.