Galactic Rims: News and a Reminiscence

The image below is striking enough that I would have run it even without the interesting story it tells about the presence of organic materials in Messier 101. Viewed at infrared wavelengths and color-coded, the Pinwheel galaxy’s spiral arms are visible, as is an outer zone, marked by a coral color, in which the organic molecules called polycyclic aromatic hydrocarbons disappear. These hydrocarbons are typically found in areas of star formation, with interesting implications for the appearance of life. So what does an organic-free zone tell us about the Pinwheel galaxy?

“If you were going look for life in Messier 101, you would not want to look at its edges,” said Karl Gordon of the Space Telescope Science Institute in Baltimore, Md. “The organics can’t survive in these regions, most likely because of high amounts of harsh radiation.” 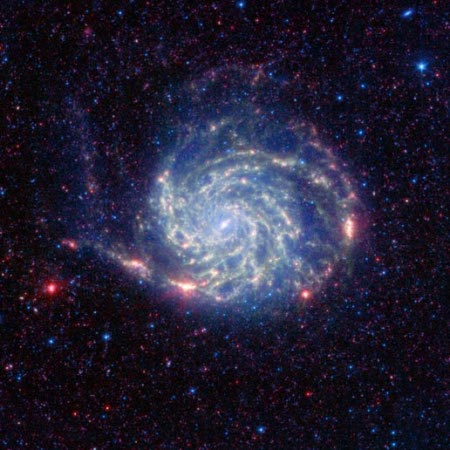 Image: The Pinwheel galaxy, otherwise known as Messier 101, sports bright reddish edges in this new infrared image from NASA’s Spitzer Space Telescope. Research from Spitzer has revealed that this outer red zone lacks organic molecules present in the rest of the galaxy. The red and blue spots outside of the spiral galaxy are either foreground stars or more distant galaxies. Credit: NASA/JPL-Caltech/STScI.

The Pinwheel is also interesting because of its high metal gradient (in astronomical terms, metals are elements heavier than helium), the galaxy showing a wide range between the concentration of metals at its center and those in the outer disk, the result of metal-producing stars being found primarily in the central regions. The gradient of polycyclic aromatic hydrocarbons here acts much the same, decreasing in concentration with distance from the center, but in the case of the organics, these molecules simply disappear in the area of the galactic rim, the victim of radiation.

All of which makes Messier 101 useful indeed. The lack of polycyclic aromatic hydrocarbons sets up a laboratory for the study of star formation in such environments. Their normal contribution is to help cool star-forming clouds, but stars in the rim regions of the Pinwheel must form, as did stars in the early universe, without the help of organic dust. The paper is Gordon et al., “The Behavior of the Aromatic Features in M101 H ii Regions: Evidence for Dust Processing,” Astrophysical Journal 682 (July 20, 2008), pp. 336–354. 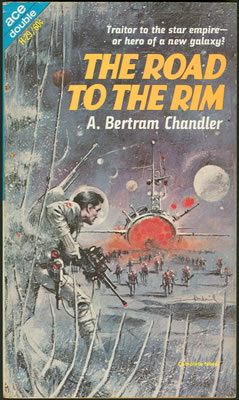 Centauri Dreams note: A news item about a galactic rim invariably brings to mind the remarkable A. Bertram Chandler, sailor, merchant marine captain and author of forty novels, as well as over 200 short stories. Born in England, he wound up an Australian, and despite his demanding profession, the chronicler of the distant worlds of the Rim. Chandler’s nautical background fed his settings and plot in both the Rim World series and his novels about space sailor John Grimes, of the Federation Survey Service. I always imagined Chandler in his quarters typing away at a battered keyboard, his log for the day complete, sketching the farthest reaches of space with the calm, practiced skill of a man used to command. I wonder what this ship’s master would have made of the ‘no-organics’ zone around the Pinwheel galaxy…