How does a planet full of amateur and professional astronomers miss an exploding star that was one of the brightest novae in the past ten years? The fact that the event called V598 Puppis (the brightening of the star USNO-A2.0 0450-03360039) was only spotted days after its explosive appearance by an orbiting space observatory that was turning from one target to another seems remarkable, but maybe it’s a salutary reminder that with resources limited on the professional level, amateurs are still needed to track such interesting events. 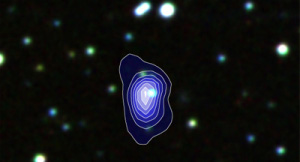 The observatory in question was ESA’s XMM-Newton, an X-ray observatory whose data is recorded even as the satellite moves between different objects. That ‘slewing’ data revealed that the star in question had brightened by more than 600 times, as verified by later observers at Las Campanas Observatory in Chile. The evident cause: A white dwarf drawing off gas from a companion star, building sufficient quantities that a nuclear reaction released the observed energies, which were finally seen as an increase in brightness.

XMM-Newton, because it operates at X-ray wavelengths, was an unlikely discovery mechanism, X-rays generally being masked by the debris cloud of the detonation before they are detected. That means the explosion took place days before the orbiting observatory spotted it, with no reports from Earth-based sweeps of the sky that look for such events. Once found, the source was the subject of a report quickly circulated on the Internet, and the stars involved subjected to intense study.

“Suddenly there was all this data being collected about the star. For variable star work like this, the contribution of the amateur community can be at least as important as that from the professionals.”

Indeed. Accidental discoveries are among the most exciting events in science, the sort of thing those of us with a yen to get involved may find irresistible to pursue, now that it has become apparent that a nova visible to the naked eye could escape current notice. Plenty of work can be done at the amateur level, which is now feeding useful data to all kinds of professional projects including the hunt for extrasolar planets (see TransitSearch for more on just one such opportunity). As the cost of admission drops with further miniaturization and the inevitable price curve of electronics, the opportunities should only grow.