It’s been a tough weekend, not only with the loss of the SpaceX Falcon booster but also the NanoSail-D sail experiment that flew aboard it. I’ll have more on the loss of the sail tomorrow, but this may be a good day to look back and reflect on some of the titans of astronomical history, including the Hale instrument whose views of the heavens gave so many of us early inspiration. Tau Zero journalist Larry Klaes has been pondering these matters, and offers us a look at some of the people and instruments that proved essential in changing our view of the universe.

Sixty years ago, on June 3, 1948, the most massive astronomical tool of the era was dedicated on Palomar Mountain near Pasadena, California. Known as the Hale Telescope, this instrument was much bigger than any telescope that had ever come before it. In its nearly three decades as the reigning largest telescope on Earth, the “Giant Eye” of the Palomar Observatory revealed new vistas of the heavens ranging from nearby worlds in our Solar System to the most distant galaxies billions of light years away. 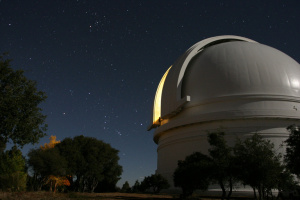 The key to the scientific success of the Hale reflector telescope was its main mirror, which was made by Corning Glass Works (now known as Corning Incorporated) in Corning, New York, using their new Pyrex glass that was stronger and more flexible than other types of similar material. Such a material was necessary, as the initial mirror design was 200 inches (16.6 feet) across, 26 inches thick, and weighed 20 tons.

Image (click to enlarge): Palomar Observatory on what appears to be a fine night for viewing. Note Orion just above the trees. Credit: Scott Kardel.

Corning built two such mirrors at its glass factory in 1934 (the first one, a flawed piece later used for testing, is still on display in the company museum) and shipped it out to Pasadena on a slow-moving train. During its two-week journey across the country, huge crowds all along the delivery route came out to see the monster mirror. In Buffalo and several other major cities that the mirror passed through, the local police were called to control the throngs of people who massed around the special train.

A combination of the years it took to polish the mirror to its nearly flawless finish, the subsequent intervention of World War Two, and other factors kept the Hale Telescope from going into full operation until the year after its public dedication in 1948. The giant instrument retains yet another connection to Central New York, for it is now operated by a consortium of Cornell University, Caltech, and the Jet Propulsion Laboratory.

This year marks another important and much older telescope anniversary, one that essentially made the device housed inside that large white art deco dome on Palomar Mountain and every other telescope before and after it possible: The first definitive description (via a patent application) of a telescope.

The idea of magnifying objects using lenses and mirrors made of glass, quartz, and other substances goes back to ancient times. Reading glasses, or spectacles, were made during the Middle Ages to help people with poor or failing eyesight. One century before the telescope was “officially” recognized, Leonardo da Vinci described in his famous notebooks how a combination of lenses and mirrors would help one “to see the Moon enlarged… and …in order to observe the nature of the planets, open the roof and bring the image of a single planet onto the base of a concave mirror. The image of the planet reflected by the base will show the surface of the planet much magnified.” Whether da Vinci ever actually built and utilized what he wrote about in 1508 is a subject of dispute among historians. 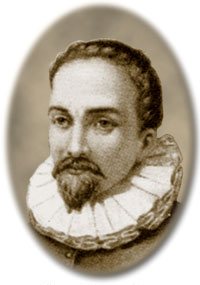 There were others throughout Europe and the Middle East who also described what might be called a telescope during this era, but it was the Dutch spectacle maker named Hans Lippershey who applied for a patent on the telescope on September 25, 1608. Although Lippershey was not granted the patent, he was paid well for the invention by the Dutch government, which was focused on the telescope’s military and commercial applications.

Image: Hans Lippershey (1570-1619), the first to apply for a patent on a telescope design, and possibly the inventor of the first practical refracting instrument.

Within months of the announcement of this new observing instrument, telescopes were being made across Europe. Among the scientists of the era who were interested in the astronomical possibilities of the telescope, the most famous of them was Galileo Galilei.

Dissatisfied with the rather crude instruments made in his day, the Italian astronomer constructed his own telescopes, which he began using in 1609 to start a revolution in humanity’s understanding of the Cosmos. Being one of the first scientists to aim his telescopes at the heavens, Galileo saw that Earth’s Moon was not a smooth, polished sphere as once believed, but a cratered, mountainous place: An actual world much like our planet. 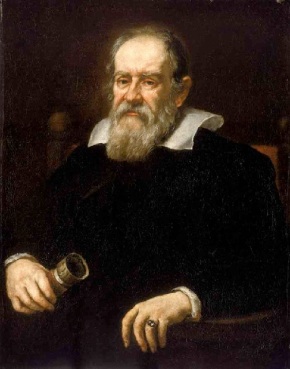 When Galileo observed the planet Jupiter in January of 1610, he saw four small “stars” moving around the gas giant globe. These points of light turned out to be the four largest of Jupiter’s moons – Io, Europa, Ganymede, and Callisto – which were later dubbed the Galilean satellites in the astronomer’s honor. Not only were the satellites the first bodies known to circle a world besides Earth, this discovery gave weight to the theory of Nicholas Copernicus, who had declared nearly two centuries earlier that Earth and the other worlds of the Solar System orbited the Sun, rather than everything in the Universe circling our planet, as was long believed.

These innovations by Galileo and his contemporaries forever changed the way humanity looked at the Universe and our place in it. As telescope technology improved, astronomers gained even more evidence that our world was neither the center of existence nor the lowest of all places in the Cosmos, but just one of many worlds in a Universe full of stars and planets collected into immense cosmic islands called galaxies.

Although we now have instruments much larger than the Hale Telescope and sophisticated satellite telescopes exploring the heavens beyond the blurring confines of Earth’s atmosphere, the basic design and purpose of all telescopes has remained the same since a Dutch spectacle maker built the first models, an Italian scientist aimed his own optical tubes at the sky, and a far-seeing astronomer made some of the largest telescopes of the Twentieth Century possible. The role of these instruments in enhancing our understanding is nowhere near the end of its journey.