‘Hanny’s Voorwerp’ may soon enter the astronomical lexicon as a reference to anomalous objects in deep space. ‘Hanny’ is Hanny van Arkel, a 25-year old Dutch school teacher and participant in the Galaxy Zoo project, where she and 150,000 other volunteers worldwide help to scan galaxy images online. ‘Voorwerp’ is the Dutch word for ‘object,’ in this case a conglomeration of gas heated to about 10,000 degrees Celsius and marked by a hole in its center. The suspicion grows that van Arkel has stumbled upon an entirely new class of astronomical object. 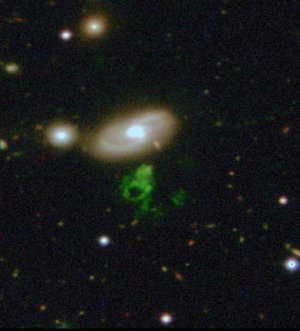 Out of such finds does the work of a computer-armed volunteer become fodder for the Hubble Space Telescope, which will soon have ‘Hanny’s Voorwerp’ under observation. The object is apparently being illuminated by a source we cannot see, leading the Galaxy Zoo team to look at the nearby galaxy IC 2497. The quasar at the heart of this galaxy seems to have shut down some time in the past 100,000 years — at least, that’s the theory — while its ‘light echo’ persists in our view of the Voorwerp. Chris Lintott, an organizer of the Galaxy Zoo project, puts it this way:

“From the point of view of the Voorwerp, the galaxy looks as bright as it would have before the black hole turned off – it’s this light echo that has been frozen in time for us to observe. It’s rather like examining the scene of a crime where, although we can’t see them, we know the culprit must be lurking somewhere nearby in the shadows.”

Image: ‘Hanny’s Voorwerp’ : the green blob of gas [center] believed to be a ‘light echo’ from the bright, stormy centre of a distant galaxy that has now gone dim. Credit : Dan Smith, Peter Herbert, Matt Jarvis & the ING.

But what caused the hole 16,000 light years across that lies at the center of Hanny’s find? Chances are we’ll be pondering that for some time, with growing interest in what Hubble will see. What a boost for the Galaxy Zoo, which has produced 50 million classifications for a set of one million images online. And what a reminder, too, that at their present state of development, computers aren’t always as capable as people at finding unusual patterns. What they have allowed, of course, is the fecund networking that makes such an exciting project possible.

And if you’re thinking about anomalous objects in deep field images, you should ponder a question Adam Crowl asked recently on his Crowlspace site. Supposing a species somewhere in the universe attains a ‘Singularity’ state and is able to render itself essentially immortal, what will it then do for energy? We may be able to conceive of machine-based intelligence gaining a kind of immortality, and perhaps even the uploading of a biological creature’s consciousness, but stars aren’t immortal, as the inexorable physics of fusion attest.

Adam looks at two recent papers that consider how stellar lifetimes might be extended (see his site for the references), none of them stranger than the black hole quasi-star, which he explains thus:

A star is essentially an object in which the pressure created by inward pull of gravity is counteracted by the outward pressure of escaping electromagnetic energy – either indirectly as particle agitation (what we call ‘heat’) or directly as radiation pressure. Inside a quasi-star the hot layers of gas above the black hole are bloated into a heat-pressure supported radiating surface, a luminous star, by the energy of infalling matter. As matter falls into a black hole it can lose up to ~5.7% of its mass energy as radiation – this is more efficient than a star’s piddling 0.7% energy production via nuclear fusion.

The downside? Violent instability as the result of stellar opacity, which can cause the gaseous envelope around the star to be blown away, exposing the accreting black hole beneath. But maybe there’s another way, a star that actually uses dark matter in the form of WIMPs — Weakly Interacting Massive Particles — to the density of about a billion per milliliter. Now this gets interesting indeed:

…with the right density of WIMPs (about a billion per millilitre) a 20 Solar Mass star can be ‘frozen’ and still be happily burning on the Main Sequence for as long as the current age of the Universe. That’s a life extension of about ~2,000 fold, so it’s definitely enticing to imagine ETIs shepherding Dark Matter into the Galactic Core and giving their stars a life-extension. With a mass-energy conversion efficiency of ~60% the Galaxy’s 1.2 trillion Solar Masses of Dark Matter could keep its stars burning at 30 billion Solar Luminosities (current output) for ~350 trillion years. Much of that luminosity is from over-active O, B and A stars, so the useful light level is more like ~3 billion, thus 3.5 quadrillion years of starlight is available for all to bask in. Not forever, but substantially better than the darkness awaiting the natural Galaxy in that epoch.

Dark matter as an energy source for an advanced civilization takes us way out on a speculative limb, but it’s also an energizing way to ponder our options in next-generation SETI. For if such long-lasting stars, imagined either as ‘quasi-stars’ with black holes at their center or as ‘dark stars’ using the annihilation of dark matter, could be created, what would be their most obvious signature? Would there be a quick way to identify them, something that sets them apart from the wide range of other stellar objects? Or would they, like ‘Hanny’s Voorwerp,’ languish in archival records until dug up by a researcher noting an anomaly?