Advanced Propulsion: The Next Steps

Here we depart briefly from the norm by looking at the work of Kimberly Trent, a graduate student in the Applied Physics Program at the University of Michigan. Working as an intern with Marc Millis at NASA’s Glenn Research Center, Trent examined the broad issues of advanced propulsion and focused on a research topic that takes off on a Robert Forward idea from the 1960s. The goal: To develop a propulsion concept involving non-Newtonian frame-dragging effects, which Trent studies in relation to the work of Martin Tajmar. The details follow, in an article designed to show one student’s involvement in the kind of studies Tau Zero hopes to encourage at other institutions.

This past summer, I interned at the NASA Glenn Research Center in Cleveland, OH through the NASA Academy program. My individual research project was in theoretical spacecraft propulsion. This area involves research into devices and concepts such as space drives, warp drives, gravity control, and faster-than-light travel. This research began in the 1960s and was mainly carried out by private companies, individual efforts, and the Air Force. For example, Robert L. Forward who founded Forward Unlimited and who consulted for NASA and the Air Force, did studies on the possibility of generating gravity controlling forces using an electromagnetic torus configuration with an accelerated mass flow instead of an accelerated electric current. 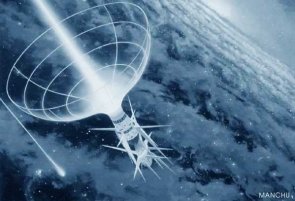 In the 1990s, governmental funding increased for theoretical propulsion research. One of the programs funded was the Breakthrough Physics Propulsion (BPP) Project (1996-2003) headed by Marc Millis, who was my advisor this summer. This project supported research that strove to uncover new physics that would led to the development of more advanced propulsion methods. Since current propulsion technology is not suited for extended manned missions and interstellar travel, new physics, or a deeper understanding of the laws of nature, is needed so that more advanced propulsion methods can be developed. If new propulsion physics is discovered, a new class of technologies would result, revolutionizing spaceflight and enabling humanity to learn even more about the Universe.

On the other hand, even if a breakthrough does not exist, using the narrower goal of breakthrough propulsion introduces a different point of view for tackling the lingering unknowns of physics. Analyzing the unanswered questions of science from this perspective can provide insights that might otherwise be overlooked from just curiosity-driven science. Theoretical spacecraft propulsion research is important and useful because its minimum value, which is what can be learned along the way, can still be revolutionary. The BPP Project ended in 2003 when NASA’s priorities shifted.

Even though research has decreased in this area due to lack of funding, progress is still being made by private companies and individual effort. For example, Millis and some of the scientists who worked with him on the BPP Project, along with other scientists that he networks with around the world, continue to pursue research in their spare time. Millis founded the Tau Zero Foundation, which formally connects this group of researchers. In addition to collaborating on further research and reviewing papers, they create tools that will make it easier for the next generation of researchers to access past research in this field.

One of these tools is a textbook put together by Millis and his associates entitled Frontiers of Propulsion Science, which is pending publication through AIAA. A great amount of research in these areas has been compiled for the first time in this book. In addition, the book provides guidance for researchers who wish to enter the field, stressing to them the importance of approaching this research in a scientifically rigorous way. In order for this research to be taken seriously by critics and other scientists, Millis and his colleagues emphasize that researchers must strike a balance, conducting their study within the rigorous constraints of conventional physics while still remaining open to the possibility of results that may test or extend our understanding of those principles.

This summer, I used the manuscript of this book along with a number of other individual research papers to help me carry out my research. During the first part of the summer, I read through much of the book to familiarize myself with past and current theoretical spacecraft propulsion research. Then I decided on a research topic that was of interest to me. The topic I chose explores the non-Newtonian frame-dragging gravitational forces that have been observed near distant rotating massive cosmological objects, and that NASA’s Gravity Probe B has attempted to detect near the earth. In addition, these gravitational forces can be derived from Einstein’s general relativity field equations.

Due to the small magnitude of these forces on a cosmological scale, it was thought that they could only be detected and studied through astronomy and very sensitive satellite experiments. Then in the early 2000s, Martin Tajmar started to investigate rotating ultra-cold rings cooled by liquid Helium, and detected that they were generating what appeared to be macroscopic frame-dragging fields. These effects are still undergoing examination in ongoing experiments. However, preliminary mathematical analysis of these fields using Einstein’s equations shows that these frame-dragging forces and the Newtonian gravitational force may have a relationship analogous to that described by Maxwell’s equations for electricity and magnetism.

Using this preliminary analysis and these initial results from Tajmar’s experiments, I wrote a paper in which I performed a cursory frame-dragging propulsion assessment. I proposed a conceptual device similar to the gravitational version of the electromagnetic torus Robert Forward proposed in the 1960s. However, his torus was based on cosmological observations and therefore required a mass flow with the density of a dwarf star flowing through tubing with the diameter of a football field to produce a gravitational field at the center of the torus equal to 1g.

Using Tajmar’s results, rotating ultra-cold rings with a diameter of about 6 inches replaced the massive tubing and mass flow and resulted in a gravitational field with the same 1g magnitude at the center. Still, relativistic accelerations on the order of 1011 m/s2 would be needed even with this version of the torus. However, this analysis shows that we may be making progress towards figuring out how to make something like gravity control a possibility in the future.

Keep in mind that this analysis was a preliminary assessment in which many assumptions were made. Its purpose was to demonstrate how the frame-dragging effect might be used for propulsion so as to stimulate additional thought and further research on this topic. At the end of my paper the “next-steps” for further research in this area were outlined. These include deriving equations for the torus configuration from Einstein’s equations directly so that a more exact analysis can be performed, and carrying out additional experiments on the frame-dragging effect Tajmar is observing so that it can be better understood. At the end of my summer program, Millis found the paper I wrote to be suitable for submission to the Journal of the British Interplanetary Society. We submitted the paper and are now awaiting the peer review process.