Dark Matter and Its Interactions

Keeping our eyes open over a whole range of wavelengths makes priceless science possible. Thus the new data on dark matter, culled from observations of the galactic cluster known as MACSJ0025.4-1222. The Hubble Space Telescope offered up images in the visual light range, sufficient to provide astronomers (thanks to the effects of gravitational lensing) with a map of dark matter associated with the cluster. The Chandra X-Ray Observatory provided a balancing map of ordinary matter by showing us the distribution of hot gas in the cluster, the latter readily visible in the X-ray wavelengths Chandra works at. 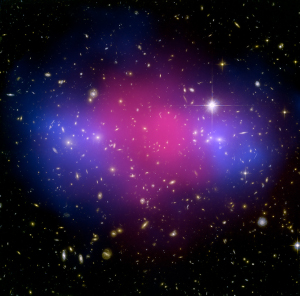 The result is the beautiful, if color-coded, image at the left. Here the dark matter is shown in blue, the ordinary matter in pink. The assumption is this: The two galactic clusters that formed MACSJ0025.4-1222 (each a quadrillion times the mass of the Sun) merged at titanic speeds, causing the hot gas (ordinary matter) within each to collide and slow. The dark matter, however, seems to have passed right through the collision event. The separation visible in the image supports a model of dark matter in which its particles interact little, if at all, with each other, although they are responsive to gravity.

Image: This newly studied cluster, officially known as MACS J0025.4-1222, shows a clear separation between dark and ordinary matter. This helps answer a crucial question about whether dark matter interacts with itself in ways other than via gravitational forces. Credit: X-ray(NASA/CXC/Stanford/S.Allen); Optical/Lensing(NASA/STScI/UC Santa Barbara/M.Bradac).

Located in the constellation Cetus (the Whale) at a distance of some 5.7 billion light years, this interesting cluster offers up independent evidence for an effect previously detected in 1E 0657-56, the so-called Bullet Cluster, in 2006 (but see this for John Moffat’s alternate take on the Bullet Cluster results). The latter was also formed through the collision of two large clusters, and like MACSJ0025.4-1222, showed a clear separation between normal and dark matter. Now we’re in interesting territory, for verifying the Bullet Cluster findings re dark matter indicates the latter are not an exception. Have a look at the image below for clarification of the gravitational lensing technique used. 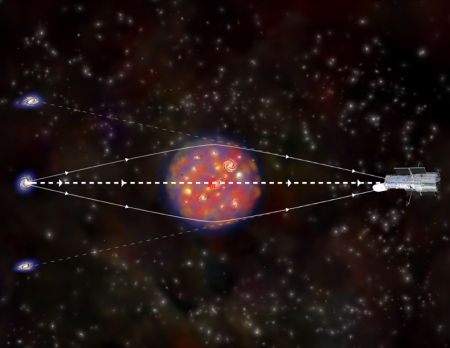 What we’re observing here is the effect of gravity from a galaxy cluster distorting the light of background galaxies, an effect predicted by Einstein. Two distorted images, representing the same galaxy, are visible above and below the actual location of the galaxy. Astronomers can use numerous such distorted images to pull together a map of gravity’s effects, thus showing the location of mass in the cluster. As we can see in the first image, most of the matter in MACSJ0025.4-1222 is dark. Image credit: NASA/CXC/M.Weiss.

Current thinking, in fact, is that dark matter is about five times more common than the ordinary matter we assumed, until not so long ago, to be the prime constituent of the universe. MACSJ0025 backs up these findings. From the spacefaring standpoint that invariably guides us in these pages, the question is again posed: Is there a kind of reaction mass in space that may offer clues to new forms of propulsion? Yet if this mass is what the researchers call “…a relatively collisionless form of dark matter,” can it ever be harnessed other than through its gravitational interactions with ordinary matter?

The paper is Bradač et al., “Revealing the properties of dark matter in the merging cluster MACSJ0025.4-1222,” accepted for publication in The Astrophysical Journal (abstract).