Although we often talk about the Magellanic Clouds as satellites of the Milky Way, recent research seems to point to a different conclusion. The dwarf galaxies may be moving too fast to be bound to our own, cities of stars simply flowing past us in the night. Be that as it may, the Milky Way still has over twenty other dwarf galaxies in orbit around it, eighteen of which have been the subject of recent work aimed at calculating their masses. The odd results have striking implications for dark matter.

For the dwarf galaxies around us vary greatly in brightness, from a thousand times the luminosity of the Sun to a billion times that amount. You would assume that the brightest dwarf galaxy would have the greatest mass, while the faintest would show the least. The surprise is that all the dwarf galaxies have roughly the same mass, some ten million times the mass of the Sun within their central 300 parsecs. Here’s Manoj Kaplinghat (University of California at Irvine) with a helpful comparison:

“Suppose you are an alien flying over Earth and identifying urban areas from the concentration of lights in the night. From the brightness of the lights, you may surmise, for example, that more humans live in Los Angeles than in Mumbai, but this is not the case. What we have discovered is more extreme and akin to saying that all metro areas, even those that are barely visible at night to the aliens, have a population of about 10 million.”

What’s going on? The dwarf galaxies, about half of them found within the past few years by the Sloan Digital Sky Survey, are primarily made up of dark matter, the ratio of dark to normal matter becoming as high as ten thousand to one (the latter are the most dark-matter dominated objects known). Even the faintest dwarf galaxies, all but invisible to us, contain huge amounts of dark matter. The researchers believe that clumps of dark matter can exist that contain no stars at all, and that a minimum dark matter mass exists — about ten million times the mass of the Sun — that allows stars within the dark matter to form into galaxies. 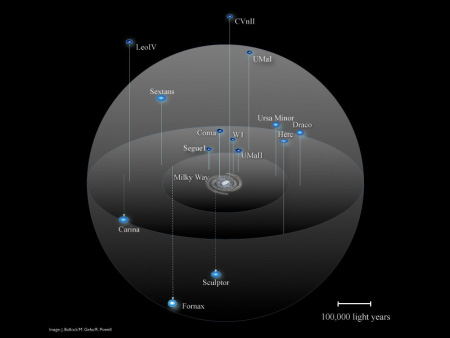 Image: Satellite galaxies studied by UCI researchers that are within 500,000 light-years of the Milky Way. Credit: J. Bullock/M. Geha/UCI.

Small, gravitationally bound clumps of dark matter are known as haloes, and there’s no reason why haloes can’t be smaller than the minimum size needed for galaxy formation. Indeed, the Milky Way may be teeming with them. Consider this, from the team’s letter to Nature:

Are we getting any closer to an understanding of the elusive particle that makes up dark matter? A key to understanding the stuff at the microscopic level may be operations at the Large Hadron Collider, scheduled to become operational this year. But even as we ponder the possibilities of actually creating dark matter in the lab, the astronomical outlook is all about building a larger dataset of low-luminosity galaxies. From the paper:

Future imaging surveys of stars in the Milky Way will provide a more complete census of low-luminosity Milky Way satellites, with the prospects of determining whether astrophysics or fundamental dark matter physics is responsible for setting the common mass scale. In particular, the masses for the faintest dwarf galaxies will become more strongly constrained with more line-of-sight velocity data. This will sharpen the observational picture of galaxy formation on these small-scales and provide data around which theories of galaxy formation may be built.