Get out to about 2.4 AU from the Sun (2.41 AU, to be precise) and your radio signals have a long travel time. It takes 20 minutes to cross the 360 million kilometers between Earth and the Rosetta spacecraft, and that, of course, is one-way. As we’ve learned from all our deep space missions, spacecraft are largely on their own for the brief and critical window of an encounter, like the one with asteroid Steins that is coming up for Rosetta. 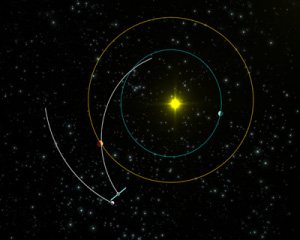 Opportunities for possible trajectory correction maneuvers exist both on September 4 and 5th, but it’s on the 4th that Rosetta’s controllers will have their last chance to acquire optical images for navigation. Uplink commands for asteroid fly-by mode will be sent on the morning of the 5th and then we wait for results as the vehicle flips for observation and tracking. Rosetta will close to within 800 kilometers of the asteroid, passing it at a speed (relative to Steins) of 8.6 kilometers per second.

Closest approach is 18:58 UTC on the 5th, with the start of the science download at 2030. Long live the Internet — as we’re getting used to during and after these events, we’ll have imagery the next day, to be published on the ESA Rosetta site. Be aware of the newly reactivated Rosetta blog. Rosetta’s spacecraft operations site is available here.