Making contact with an extraterrestrial civilization, whether by microwave, laser or neutrino, highlights the problem of time. Suppose you are looking for a newly emerging technological culture around another star. When do you transmit? After all, even the most powerful signal sent to Earth a million years ago would have no listeners, which is why some have suggested putting actual artifacts in promising solar systems. Rather than transmitting over time-scales measured in eons, you leave an object that can be decoded and activated for communications. All kinds of interesting science and science fictional scenarios flow from that idea. 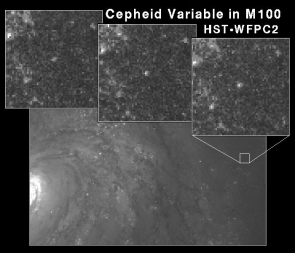 But what if you want to contact not just a few highly targeted systems, but instead send a signal intended for everyone in the galaxy with the means to receive it? As John Learned (University of Hawaii) and team speculate in a new paper, one way to do that would be to select highly visible and important stars to carry your message. Cepheid variables are a natural fit. Because of the clear relation they show between luminosity and variability, they’ve helped us figure out distances on a galactic scale, and have been crucial in our studies of the Hubble constant. As well as being important to science, they’re bright and easily observed, like the ‘water-hole frequencies’ an obvious place to search for signals.

Image: This NASA Hubble Space Telescope image of a region of the galaxy M100 shows a class of pulsating star called a Cepheid Variable. Though rare, these stars are reliable distance indicators to galaxies. Could they also be put to work as galactic communications beacons? Credit: Dr. Wendy L. Freedman, Observatories of the Carnegie Institution of Washington, and NASA.

Exactly how might a super-civilization modulate an entire star? The authors speculate about using neutrinos for the purpose:

Neutrinos would seem to be the ideal delivery means for transporting a pulse of energy to the stellar core, both due to penetration ability and to speed. If one wanted to employ infalling material as the trigger, this disturbance would propagate at near the local speed of sound, and might well evaporate prior to reaching the core in any event. Neutrinos of about 1 TeV would have an attenuation length of about 106 km at solar densities. We have not modeled Cepheids in order to determine the optimum neutrino energy, but it is irrelevant for the present discussion: we leave it as an engineering problem for the star tickling civilizations out there. The initial ﬂavor mix of the neutrino beam makes little difference since oscillations will mix the ﬂavors and in any event the cross-sections are ﬂavor independent.

The Star Ticklers — it sounds like a 1950’s title, maybe from one of the Ace science fiction double paperbacks. And it’s a curiously provocative concept. Deeply interesting here is the supposition that, if a modulated signal were being broadcast through the use of Cepheid variables, we might already have evidence for it in the abundant data collected about these stars. Normally, Cepheids are studied through a small number of randomly spaced observations conducted over a long period of time. The authors run through the methods of data collection and analysis, and point to places where those methods might actually mask the presence of an interesting signal. And they suggest a way to pull a signal, assuming one is there, out of the noise. This is also worth quoting:

Thereafter the conclusive ﬁnding of an ETI signal would come about by identiﬁcation of regularities which are hard to understand from any natural oscillator, such as involving repeated complex sequences, prime numbers, a limited “alphabet” (e.g. something akin to the familiar ASCII code), or even an apparent raster-like arrangement. At this point we cannot but fall back upon the supposition that we will recognize unnatural stellar ﬂuctuations when we see them. In sum, we think the normal method of employing Fourier transforms (with windowing, gap ﬁlling, long term averaging, etc.) and other methods in common use to analyze the periodicity of Cepheids may cloud the discovery of intentional modulation, and that cycle-by-cycle periods need to be examined.

The prospect that existing records of Cepheids and possibly other variables might contain the signature of a galactic internet is an exciting one indeed. It’s also interesting to look at the mechanism involved in generating the signal. The neutrino trigger generator might consist of a power station perhaps 100 AU out, one that draws energy from the radiation of the Cepheid itself, accumulating it over the course of a complete cycle and then setting off the trigger pulse. An unstable stellar system becomes the universe’s biggest signal amplifier.

Anything that helps us with what the authors call the ‘needle in a haystack’ problem is all to the good. We want to find ways to narrow the SETI search in productive directions. Here Cepheids are useful because the entire galaxy contains only about 500 known examples. Giant yellow stars massing between five and ten times the mass of the Sun, with 103 to 104 times solar luminosity, Cepheids would be not only visible but highly studied by any civilizations trying to learn about the cosmos. That makes them a productive medium for the kind of culture that can muster the resources to impose a signal upon them.