On Stellar Migrations and Habitability

The idea of a galactic habitable zone (GHZ) has a certain inevitability. After all, we talk about habitable zones around stars, so why not galaxies? A stellar habitable zone is usually considered to refer to those areas around the star where liquid water can exist on a planetary surface. Those who believe that confining habitable zones to regions like these carries an implicit bias — limiting them to life much like our own — miss the point. The habitable zone concept simply tells us where it makes the most sense to search for the kind of life we can most readily recognize, and as such, it hardly rules out other, more exotic forms of life. 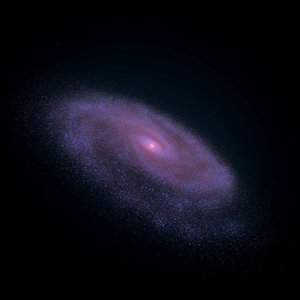 But while liquid water takes precedence in a stellar habitable zone, a galactic HZ is still being defined. Charles Lineweaver and team have examined it, among other things, in terms of stellar metallicity (the elements heavier than hydrogen and helium found in the body of a star), concluding that there is a ring several kiloparsecs wide surrounding galactic center in which life would be most likely to be found. But the ring evolves, spreads outwards with time, leaving us to recognize that galactic habitable zones can vary over the eons.

Image: A computer simulation showing the development and evolution of the disk of a galaxy such as the Milky Way. Credit: Rok Roškar/University of Washington.

That evolution now gets a much closer look from a team at the University of Washington, which ran 100,000 hours of computer simulations to study how galactic disks evolve, beginning with conditions nine billion years ago. The resultant data show that the average star can migrate through the galaxy, thus skewing the results of any habitable zone based partly on the abundance of certain chemical elements necessary for life. UW graduate student Rok Roškar puts the case this way:

“Our view of the extent of the habitable zone is based in part on the idea that certain chemical elements necessary for life are available in some parts of a galaxy’s disk but not others. If stars migrate, then that zone can’t be a stationary place.”

Stellar migration comes in handy because our understanding of the relationship between age and metallicity across star populations is changing. The paper on this work explains that relationship in terms of galactic chemical evolution:

Stars of the same age in the same general region of the galaxy are… expected to have similar metallicities. Indeed, early determinations of the AMR [age-metallicity relationship] conﬁrmed that the mean trend of stars in the solar neighborhood is toward lower metallicity with increasing age. Models, which assume that stars remain where they are born and return their nucleosynthetic yields to their local ISM [interstellar medium], typically successfully reproduce this trend.

All of which gets interesting when you consider that in the part of the galaxy in which the Sun resides, field stars and open clusters show a wide range of metallicities. The ‘scatter’ in these data implies that stars near the Sun may well have come from completely different parts of the galaxy. The findings from the simulated galaxy are clear:

Roughly 50% of all “solar neighborhood” stars have come from elsewhere, primarily from the disk interior. Interestingly, some metal poor stars have been scattered into the solar neighborhood from the outer part of the disk. Such migration has recently been inferred from observational data… Metal-rich stars, like our Sun, could have originated almost anywhere in the Galaxy.

We just looked at the question of the Sun’s siblings, and whether or not systems forming in the same early cluster as the Sun might have exchanged life-bearing materials. Tracing stellar movements back in time to reveal which stars comprise those siblings may be a tricky matter. Stars encountering a galactic spiral arm seem to retain the circularity of their orbits after such an encounter, but their orbits may change considerably in size, meaning the Sun could have been in a much different position in relation to galactic center when it formed than it is today.

Bear in mind that galactic habitable zones also factor in supernovae explosions, which could cause exterminations on nearby worlds. We have much to learn in the study of supernovae, but the UW simulations suggest that the GHZ may be a more flexible area than we have previously considered. The paper is Roškar et al., “Riding the Spiral Waves: Implications of Stellar Migration for the Properties of Galactic Disks,” accepted for publication in Astrophysical Journal Letters (abstract). The earlier Charles Lineweaver paper is “The Galactic Habitable Zone and the Age Distribution of Complex Life in the Milky Way,” Science Vol. 303, No. 5654 (2 January 2004), pp. 59-62, with abstract here.