Exoplanets on the Fringe

Most Centauri Dreams readers will be familiar with the concept of interferometry by now. The idea is to combine light from multiple telescopes, allowing the combined array to act like a single telescope with a diameter equivalent to the distance between the telescopes. Thus we have the European Southern Observatory’s VLTI (Very Large Telescope Interferometer), which uses two telescope elements some 200 meters apart. The VLTI has now put a new instrument called PRIMA into operation, with useful exoplanetary implications.

PRIMA (Phase Referenced Imaging and Microarcsecond Astrometry) is designed to pick out the tiny motions a star makes as it is influenced by unseen planetary companions. We’ve long studied such wobbles in stars through radial velocity methods — these analyze the light from the star, determining through Doppler shifts in the star’s spectrum how a companion object may be influencing it. But PRIMA will find the wobbles through actual imaging, using incredibly precise astrometric measurements. The images below, although not based on PRIMA, illustrate the basic operation of interferometry. 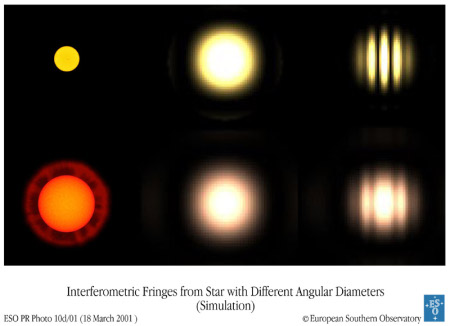 Image: The difference between two stars of different diameter is illustrated. While the image of the smaller star displays strong interference effects (i.e., a well visible fringe pattern), those of the larger star are much less prominent. The “visibility” of the fringes is therefore a direct measure of the size; the stronger they appear (the “larger the contrast”), the smaller is the star. Credit: ESO.

This ESO news release talks about measuring angular differences of about ten micro-arcseconds using the PRIMA instrument, good enough for gas giant detections. We’ll do much better than that once we have future space-based observatories tuned for astrometry, but for now this is state of the art stuff. The first starlight fed into PRIMA reached it on September 2. In interferometer lingo, this is not ‘first light’ but ‘first fringes,’ since it refers to the first time the light from different instruments was combined to produce the pattern of bright and dark lines known as interferometric fringes. The differences between the signals allow astronomers using these instruments to measure angles to exquisite precision. 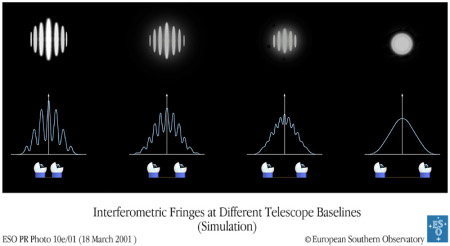 Image: If the distance between the two telescopes is increased when a particular star is observed, the fringes become less and less prominent. At a certain distance, the fringe pattern disappears completely. This distance is directly related to the angular size of the star. Credit: ESO.