Hubble’s ACS Nearby Galaxy Survey Treasury (ANGST) has everything going for it but the right acronym. One thing the spectacular images returned from this work definitely do not lead to is a deep, philosophical fear or, as ‘angst’ is defined by the American Heritage Dictionary, “A feeling of anxiety or apprehension often accompanied by depression.” Quite the contrary, the results of ANGST are all but euphoric in their celebration of stars in the galaxies we see around us, fully sixty nine galaxies in the so-called ‘Local Volume.’

The euphoria comes from Hubble’s sharp vision. The Local Volume encompasses galaxies beyond the Local Group, with distances in the survey ranging from 6.5 million light years to 13 million light years from Earth. That’s actually close enough that the right tools for seeing — Hubble’s Advanced Camera for Surveys and Wide Field Planetary Camera 2 — can pull individual stars out of what had been an indistinct galactic background. Out of that we stand to learn something about star formation in different types of galaxies.

The study ranges from galaxies in which star formation is active and ongoing to those made up entirely of ancient stars. Julianne Dalcanton (University of Washington), leader of the ANGST survey, sums up what the findings point to:

“When we look back in time at distant, young galaxies, we see lots of vigorous star formation. However, we can only guess as to what those galaxies might eventually turn into. Using the galaxies in the nearby universe as a ‘fossil record,’ we can compare them with young galaxies far away. This comparison gives us a history of star formation and provides a better understanding of the masses, structures, and environments of the galaxies.”

The image below suggests the level of detail involved. It’s a composite of three close-up views of NGC 300, a member of the Sculptor Group of galaxies. 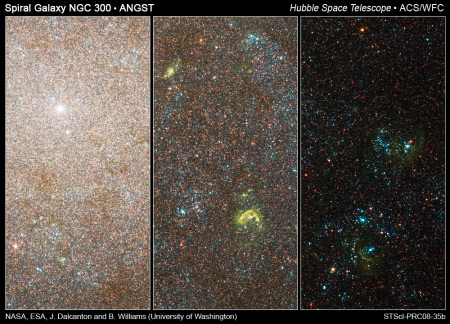 Image: At far left, Hubble resolves a dense swarm of stars, patches of dust, and a bright central star cluster. This cluster lies at the very nucleus of the galaxy. Similar clusters are thought to be related to the formation of supermassive black holes. The image at center shows a star-forming region a few thousand light-years farther from the galaxy’s center. The yellow blobs are the glow from hot gas that has been heated by radiation from the nearest young, blue stars. The image at far right reveals more diffuse groupings of young, blue stars, farther away from the galaxy’s center, along with faint shells of hot gas. Credit: NASA, ESA, and J. Dalcanton and B. Williams (University of Washington). 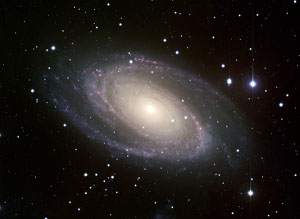 Interesting in terms of astrobiology is the work on M81 that draws on data from this survey. Here I’m quoting from a Hubble news release (the relevant paper isn’t yet online), but Benjamin Williams (University of Washington) notes that stars in the outer disk of massive spiral galaxies like this one formed in the early universe. In M81’s case, we’re talking about periods of heavy star formation occurring seven billion years ago — half the current age of the cosmos. What’s intriguing here is the rapid enrichment of heavy elements via supernova explosions. Says Williams: “We were surprised by how quickly the elements formed and how the subsequent star-formation rate for the bulk of the stars in M81 changed after that.”

Image: The spiral galaxy M81. If stars in its outer disk formed seven billion years ago and the galaxy was rapidly filled with heavy elements via supernovae, could civilizations have emerged a billion or more years before our Sun even formed? Credit: Jonathan Irwin/DSS2.

There’s our old friend Fermi again, teasing us with the possibility of civilizations far more ancient than our own. The paper is Williams et al., “The ACS Nearby Galaxy Survey Treasury I. The Star Formation History of the M81 Outer Disk,” submitted to the Astronomical Journal.