Changing How We See

Again and again I’m amazed by our growing ability to tease information out of apparent noise. Consider the problem of viewing celestial objects from Earth’s surface. The image below demonstrates the latest way to remove atmospheric blur that would otherwise bedevil a ground-based telescope. We’re looking at Jupiter through a prototype instrument called the Multi-Conjugate Adaptive Optics Demonstrator (MAD). This is a form of adaptive optics that uses two guide stars (or in this case, two of Jupiter’s moons) instead of one as references, allowing a wider field of view. 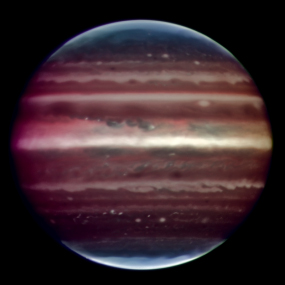 Adaptive optics involves real-time corrections made at high speed, feeding a computer-controlled deformable mirror that interprets the atmospheric distortion by examining light from the chosen guide stars. Normally, the method works with a single guide star, but that allows for atmospheric corrections only in a tiny region of sky. The new MAD methods significantly overcome this limitation. The false-color infrared Jupiter we see here is proof of the result, not only startlingly crisp but scientifically useful in the identification of an apparent shift to the south in the planet’s equatorial haze, a change that shows up clearly when this image is compared to Hubble images from 2005.

Image (click to enlarge): Jupiter in infrared light, taken on the night of 17 August 2008 with the Multi-Conjugate Adaptive Optics Demonstrator (MAD) prototype instrument mounted on ESO’s Very Large Telescope. This false colour photo is the combination of a series of images taken over a time span of about 20 minutes, through three different filters (2, 2.14, and 2.16 microns). The image sharpening obtained is about 90 milli-arcseconds across the whole planetary disc, a real record over similar images taken from the ground. This corresponds to seeing details about 300 km wide on the surface of the giant planet.

As adaptive optics continues to sharpen our view from the ground, the way we play with light gets more ingenious all the time. Scientists studying the Cassiopeia A supernova remnant are now working with ‘light echoes’ — hot spots in silicate dust near the remnant that are the result of a short pulse of ultraviolet radiation and X-rays that occurred with the supernova. Essentially, we’re looking at an explosion whose light reached the Earth in the 17th Century, but we’re now able to use the expanding gas cloud to examine energy that is being re-radiated from the blast at infrared wavelengths. See this news release for more.

The image below identifies the location of the light echoes. As to the nature of light echoes themselves, here’s how Eli Dwek (NASA GSFC) and Richard Arendt (University of Maryland), who used Spitzer data in this work, define the phenomenon in their paper:

Short-lived luminous sources can produce echoes of their outburst in the ISM. These echoes can be manifested as line emission from the gas, or reﬂected and thermally re-radiated light from the dust in the ISM. They can be used to probe the morphology of the interstellar medium (ISM) through which they are expanding and to reconstruct the historical record of the temporal behavior of the light source. 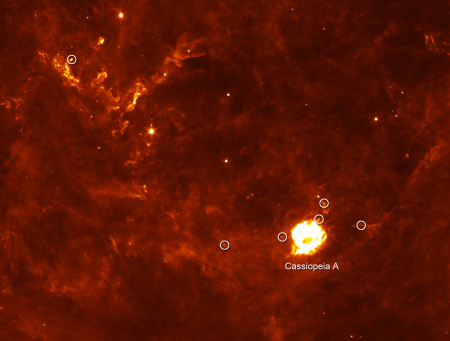 Out of this work comes an analysis of the burst that produced the echoes and an examination of the interstellar clouds that gave rise to them. The triggering event was the pulse of UV and X-rays of the original shock wave triggered by the formation of a neutron star, a blast that blew the star’s outer layers apart and preceded the flash in visible light. We have evidence that such ‘shock breakout’ occurs in a long pulse that the Swift satellite detected in 2008 from galaxy NGC 2770. That pulse was followed by the appearance of a supernova in that galaxy a few days later.

The paper on this work is Dwek and Arendt, “Infrared Echoes Reveal the Shock Breakout of the Cas A Supernova,” Astrophysical Journal 685 (October 1, 2008), pp. 976–987 (abstract). Like the adaptive optics refinements we looked at above, this work reminds us of the way science continues to transcend apparent limitations. Atmospheric distortion is rapidly being overcome. And in a sense, astronomers are learning to overcome the limitations of time by finding light echoes that carry at least part of a cataclysmic supernova’s history.