Earth as Pixel: The Extrasolar Lesson

Why would you want to take pictures of Earth from a spacecraft in orbit around Venus? Aside from the wish to see a familiar place from a distant location, our planet can also become an interesting testbed for exoplanetary studies. We’ve run into this idea before in the EPOXI mission, which is the combined extended mission of the Deep Impact spacecraft. Here the cometary component of Deep Impact was recently augmented with observations of Earth that can suggest how to study the glint of light off distant oceans, or the signature of land masses.

The extrasolar component of EPOXI is called EPOCh, for Extrasolar Planet Observation and Characterization, and it primarily involves an examination of stars with known transiting planets, looking for other planets in the system (EPOXI can detect transits of objects down to about half the diameter of the Earth) or possibly moons around the known ones. Meanwhile, the spacecraft continues its journey to comet Hartley 2 for observations there, its extrasolar investigation limited by the exigencies of the cometary mission.

But Venus Express, now in orbit around the second planet, is likewise helping us learn about distant worlds by a closer examination of our own. As seen through the cameras aboard the spacecraft, the Earth spans less than a pixel, which is all we can expect to see when we get the technologies in place to isolate light from Earth-sized worlds elsewhere in the cosmos. We need to know how to interpret potential habitability, in other words, with precious little information, and Venus Express can help.

It will be useful to know, for example, whether green plants, bright in the near infrared, can be discerned. For that matter, spectral observations can reveal information about planetary weather systems and the location of glaciers and oceans. Thus far the team is finding the work a challenge. “We see water and molecular oxygen in Earth’s atmosphere, but Venus also shows these signatures. So looking at these molecules is not enough,” says Giuseppe Piccioni (IASF-INAF, Rome).

A necessary next step is to compare the spectra of Earth’s oceans with spectra taken when continents dominate the view. David Grinspoon (Denver Museum of Nature & Science), who suggested these observations, calls this “…the first sustained program of Earth observation from a distant platform,” unlike the fleeting EPOXI images. 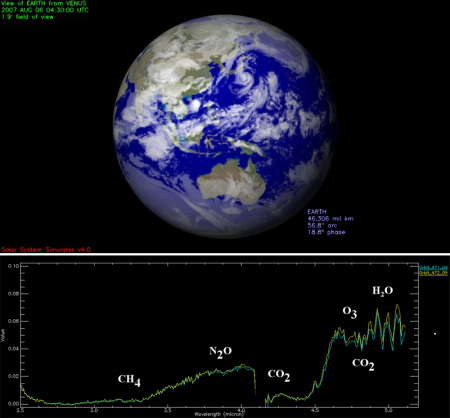 Image: This image composite shows the signatures of methane (CH4), carbon dioxide (CO2), ozone (O3) and nitrous oxide (N2O), minor species of the Earth’s atmosphere but powerful greenhouse gases, detected by the Visual and Infrared Thermal Imaging Spectrometer (VIRTIS) on board ESA’s Venus Express at infrared wavelengths, while the spacecraft was pointing Earth along its orbit around Venus. Our planet was just a pixel in VIRTIS’s field of view. These observations are relevant as they proof that a distant planet such as an extra-solar planet can reveal to an instrument like VIRTIS the signatures of chemical compounds composing the atmosphere and surface. Credit: ESA/VIRTIS/INAF-IASF/Obs. de Paris-LESIA (Earth views: Solar System Simulator JPL-NASA).

Approximately forty images of our planet have been collected in both the visible and near-infrared regions of the spectrum. What can they tell us about Earth’s atmosphere and its life-bearing capacities? With Kepler on the horizon and COROT engaged in active work in space, we may one day soon find our attention riveted by a planet whose orbital characteristics point toward habitability. Planet hunter missions beyond these should, perhaps in fifteen years, be able to resolve exoplanets down to terrestrial size. Building the necessary tools will teach us how to proceed when that welcome day arrives.