Asteroseismology is the science of looking inside a star by studying the oscillations made by sound waves as they move throughout its interior. A recent news release from the COROT team calls these ‘Sun-quakes’ when they occur on our own star, and points out that the effect can be compared to seismic waves on Earth, whose examination can tell us much about what is happening below the surface. The Solar and Heliospheric Observatory (SOHO) mission, launched in 1995, studies our Sun’s oscillations, but COROT is now extending the science to other stars.

All three of the stars the mission has studied for this purpose — HD49933, HD181420 and HD181906 — are main sequence stars hotter than the Sun. And while stellar oscillations can be studied by ground observatories, moving to space offers serious advantages. So says Malcolm Fridlund, ESA project scientist for COROT, who notes the limitations of such observations when made from Earth:

“Adverse weather conditions, plus the fact that you cannot observe stars during daytime, oblige ground astronomers to interrupt their observations. Now, the key to detecting such small stellar oscillations from big distances is not only the sensitivity of an instrument, but also the opportunity of observing the star without interruption: any interruption produces noise in the data that can cover a signal completely. Therefore, to be certain, we must approach the question with the right instruments and from space.” 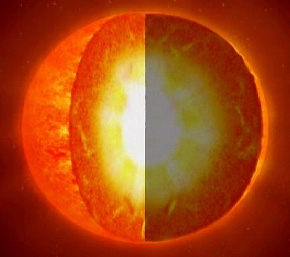 The method studies variations in the light caused by changes on the stars’ surfaces, revealing internal structure and helping to explain how energy is transported from the core to the surface. COROT’s 27-centimeter telescope is designed to look for tiny changes in brightness like this, and while we normally think of COROT as a planet-hunter, we don’t want to overlook this valuable and no less significant objective. After all, this observatory’s name stands for Convection Rotation and Planetary Transits. COROT is designed to create observations that will give us a deeper understanding of a star’s mass, age and chemical composition while comparing the Sun with other stars.

Image: When looking at stars, COROT is able to detect ‘starquakes’, acoustical waves generated deep inside a star that send ripples across a star’s surface, altering its brightness. The exact nature of the ripples can allow astronomers to calculate the star’s mass, age and even chemical composition. Credit: CNES.

Early results show that the oscillations of the three stars studied are 1.5 times as large as the Sun’s. And these oscillations, which create the variations in brightness COROT is now studying, are the only thing other than neutrinos that produce information about the inside of such stars. We’d better make the most of the data. For more results from the early COROT work on asteroseismology, see Michel et al., “CoRoT Measures Solar-Like Oscillations and Granulation in Stars Hotter Than the Sun,” Science Vol. 322. no. 5901 (24 October 2008), pp. 558-560 (abstract).