A Filament of Dark Matter?

Ponder the image below, which scientists at Tel Aviv University are interpreting in terms of the structure of the universe itself. The work draws on the well established notion that large galaxies are found on bubble-like structures — the soap bubble analogy is inevitable — with smaller dwarf galaxies scattered along the bubble surface. The Tel Aviv team thinks it has discovered visible traces of a filament of dark matter around which galaxies form. Filaments would be found at the juncture of two bubbles where the membrane is presumably thickest. 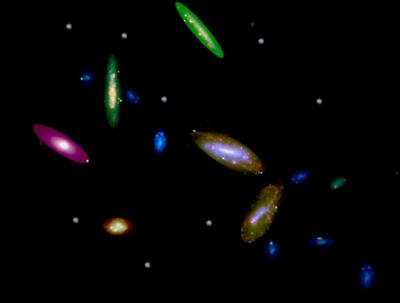 Thus the image, which shows fourteen galaxies studied at the university’s Wise Observatory. Here the galaxies are thought to stretch along a line extending from the lower right to the upper left corner. In its paper, the team calls the grouping “…a single kinematically well-behaved ensemble.” The area studied is intriguing not only because the galaxies found here seem to be forming in a line, but also because thirteen of them show new star formation. That latter fact drives the possibility that the galaxies are indeed forming on a dark matter filament, one that would attract new baryonic matter that then forms into stars. (Image credit: AFTAU).

We propose that the observational evidence argues in favor of interpreting the galaxies as located on a DM ﬁlament that is itself located in a low-galaxy-density region, and is accreting intergalactic cold gas focused by the ﬁlament. We are therefore witnessing in the classical NGC 672 and NGC 784 groups of relatively bright and nearby late-type galaxies the basic phenomenon of hierarchical clustering, the direct formation and growth of small galaxies out of intergalactic gas accreted on a dark matter “backbone”. This nearby galaxy collection offers, therefore, an ideal opportunity to study the phenomenon of hierarchical clustering in signiﬁcant detail.

If the Tel Aviv team is correct, then what we are seeing here is the first stage of the clustering of matter that will eventually form into a major galaxy. Noah Brosch, who is director of the university’s Wise Observatory, emphasizes that the phenomenon is occurring at relatively close hand. “Our studies show that you don’t need to go to the edge of the universe to find dark matter,” says Brosch. “It may be only 15 million light years away, more or less in our backyard.” Close enough for an advanced civilization to get a mission to one day? Brosch is surprisingly sanguine about not just interstellar but intergalactic travel: “Our technology is abysmally limited right now, but it could definitely happen.”

The paper is Zitrin and Brosch, “The NGC 672 and NGC 784 Galaxy Groups: Evidence for Galaxy Formation and Growth Along a Nearby Dark Matter Filament,” in press at Monthly Notices of the Royal Astronomical Society and available online.