SETI: Figuring Out the Beacon Builders

Several interesting papers on SETI have appeared in recent days, among them Gregory, James and Dominic Benford’s attempt to place SETI in the context of economics. Equally useful is Duncan Forgan’s new look at the Drake Equation, presenting a way to estimate the distribution of the crucial parameters. I’ll bypass the Forgan paper temporarily because I’ve asked Marc Millis to tackle it as soon as he gets back from the Jet Propulsion Laboratory, where he’s gone to attend a workshop. Forgan’s study has direct bearing on a Tau Zero initiative we hope to have in place by the end of the year and thus is a natural for Marc to write up.

But back to the Benfords, who have offered up twin papers (as seems reasonable for the brothers), one on SETI (with Gregory as principal author) and the other on its METI offshoot (transmitting messages rather than listening for them). James Benford is lead author on the latter. This work is so rich that I won’t try to encapsulate it in a single post, but rather draw on the ideas here over the course of a few (perhaps non-consecutive) days. In any case, I don’t want to be rushed in these discussions, where the issues are as large as the distances involved, and our philosophical approach may be as significant as our technology. And the two papers should be read in connection with each other in any case, for the analysis in the METI paper is directly relevant to developing the argument of the SETI discussion. 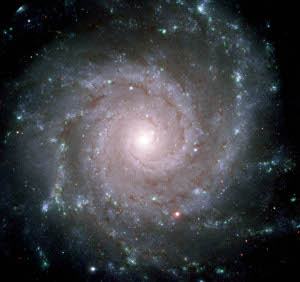 We’re close to the 50th anniversary of the Project Ozma attempts, and in SETI’s first half-century we have found no clear detections in our search of nearby stars. But over the course of the decades, our initial SETI assumptions have been challenged. We’ve gone from a Sagan-esque optimism that the galaxy is aswarm with civilizations to a far more measured (and surely more realistic) view that takes into account factors like the galactic habitable zone, and the sheer difficulty facing living things on the long evolutionary road toward intelligence.

Image: The spiral galaxy M74 (NGC 628), perhaps the home of technological civilizations that, like us, are trying to figure out whether they are alone. Credit: GMOS/Gemini North Observatory.

The Benfords — Jim at Microwave Sciences, Gregory at the University of California’s Irvine campus, and Dominic (Jim’s son) at NASA GSFC — believe that advanced societies, if they are to be found, ought most likely to exist toward the galactic center, and probably at distances of over a thousand light years. We’re thus talking, in all likelihood, about interstellar beacons rather than targeted transmissions when it comes to SETI. And if beacons are indeed at play, what can we say about their costs, and do our own standards of terrestrial cost have any application in an ETI context?

The message here is that any SETI search has to make assumptions about the beacon builders, and if we can determine something about the economics of the situation, we may learn how to target our searches more effectively. Here’s the essence of the argument about ETI:

We assume that if they are social beings interested in a SETI conversation or passing on their heritage, they will know about tradeoffs between social goods, and thus, in whatever guise it takes, cost. But what if we suppose, for example, that aliens have very low cost labor, i. e., slaves? With a finite number of slaves, you can use them to do a finite number of tasks. And so you pick and choose by assigning value to the tasks, balancing the equivalent value of the labor used to prosecute those tasks. So choices are still made on the basis of available labor. The only case where labor has no value is where labor has no limit. That might be if aliens may live forever or have limitless armies of self-replicating automata, but such labor costs something, because resources, materials and energy, are not free.

Our point is that all SETI search strategies must assume something about the beacon builder, and that cost may drive some alien attempts at interstellar communication.

SETI always seems to come with a built-in willingness to think the best of extraterrestrial cultures. If an alien civilization is sending out a message, it must be doing so out of altruism. The Benfords, though, are interested in exploring motivations from a different angle. They’d like to relate them to the only case of a technological civilization we know of, ourselves, and speculate based on human history. From that perspective, there are two reasons for sending out messages across vast time scales.

Think about what people do. You can go to the Tower of London and explore the chambers where famous prisoners like Thomas More were kept. Invariably, on the walls, you’ll find graffiti, names written into the stone. People have an apparently robust need to engage in one-way communication, putting a note in a bottle and throwing it. Indeed, the Pioneer and Voyager spacecraft are examples of the impulse. Is it likely that any of these tiny vessels will ever be intercepted? Yet putting our names, our stories, our music and our pictures on board outgoing vehicles is a method that resonates. We have a need to encapsulate who we are.

A second reason is the drive to communicate the optimum things about our culture, what Matthew Arnold called “…the best that has been thought and said in the world.” Here the Benfords cite time capsules and monuments as examples of our need to propagate our culture. The contemplation of a legacy is involved here, especially in a scenario where human lifetimes are rising. Here again the communication can be one-way. The statue of King Alfred my wife and I admired in Winchester some years back was not built to impress people within a tight time frame, but to stand as a monument that would reach future generations.

So imagine scenarios like this: A civilization with an ability to plan over millennial time scales foresees problems that are beyond its capabilities. A SETI beacon might encapsulate a call for information and help — send us everything you have on stellar warming…

Here’s another: A civilization in its death throes decides to send out an announcement of its existence. We were here and are no longer, but as long as this message endures, so in a sense do we. And let’s not discount sheer pride of the sort that could keep a beacon in operation long after the beings that built it were gone. Robotically maintained, it might boast of achievements set against the backdrop of the ruin that may eventually attend all technological cultures. Or perhaps we’ll run into interstellar proselytes, out to convert the galaxy to a particular set of beliefs by placing their highest values into their outgoing signal. 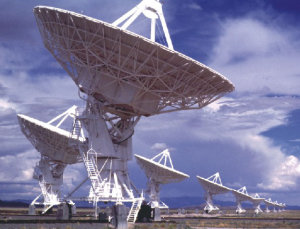 High powered signals may even be unintentional, such as the signatures of planetary radars that scan for asteroids, or perhaps the industrial activities of a space-faring civilization that boosts payloads deep into its system using beamed power. Beam-driven sail expeditions might leave such a signature (recall Niven and Pournelle’s The Mote in God’s Eye). These activities seem more likely to be detected than the far fainter signatures of isotropic radio and television broadcasts, and would carry the unmistakable message of a working technology.

Image: Does the best SETI strategy involve listening for directed messages from nearby stars? Or do we concentrate on short burst transmissions from deep in the galactic plane? Credit: VLA/NRAO.

Given all these motivations — and we don’t know how to choose between them — microwaves seem to be the best carriers of a civilization’s message, if only because interstellar absorption is minimal at those wavelengths. Can we make any guesses based upon cost and perceived value about how such a culture would proceed with a microwave beacon? If so, our conclusions would have a material impact on how we conduct the SETI search. From the paper again:

…even altruistic Beacon builders will have to contend with other competing altruistic causes, just as humans do. They will confront arguments that the response time for SETI is millennia, and that anyway, advanced societies leak plenty of microwaves etc. into deep space already. We take up these issues below. It seems clear that for a Beacon builder, only by minimizing cost/benefit will their effort succeed. This is parsimony, meaning ‘less is better’ a concept of frugality, economy. Philosophers use this term for Occam’s Razor, but here we mean the press of economic demands in any society that contemplates long term projects like SETI. On Earth, advocates of METI will also face economic constraints.

The Benfords believe that evolution will always seek for economy of effort. Their analysis is bracing stuff and it calls into question a SETI strategy that is not optimized for short bursts of pulsed microwaves and the observation times necessary to see repeat events. Another question is inevitable — have we inadvertently picked up such signals already and dismissed them? More on this in coming days. The paper, “Cost Optimized Interstellar Beacons: SETI,” is available online. We’ll look at “Cost Optimized Interstellar Beacons: METI,” available here, tomorrow.