If we want to consider how to pick up transmissions from a distant civilization, it pays to consider the most effective strategies for building interstellar beacons here on Earth. This is the method James, Gregory and Dominic Benford have used in twin papers on SETI/METI issues, papers that should be read in conjunction since the METI questions play directly into our SETI reception strategies. It pays to have a microwave specialist like James Benford on the case. Our METI transmissions to date have used radio telescopes and microwaves to send messages to nearby stars. Longer distances will cost more and take much more power.

How much would a true interstellar beacon cost, one not limited to the relatively short ranges of recent METI transmissions? Count on something on the order of $10 billion. As to power, Jim is able to quantify the amount. To reach beyond roughly a thousand light years with a microwave beacon, an Effective Isotropic Radiated Power (EIRP) greater than 1017 W must be deployed. A beacon designed for communication across galactic distances goes even higher, with ranges up to 1020 W. We can compare this to the Arecibo radio telescope, famously used for sending a message to the Hercules Cluster (M13) in 1974. Arecibo can muster 1013 W, and most (short-range) METI messages have managed 1012 to 1013 W.

We learn in these pages that microwave emission powers have increased by orders of magnitude, while the introduction of new technologies has changed our methods for emitting powerful signals since the days when Project Ozma was but a gleam in Frank Drake’s eye. The paper lays out the necessary background, noting that most high power devices operate in bursts of short pulses and are not extremely narrow band. Economical beacons are likely to be pulsed, as Drake himself would note back in 1990. The Benfords liken this strategy to that of a lighthouse, with a pulsing beam that moves and calls attention to itself.

Go through these pages for a useful survey of high power microwave (HPM) technology as it developed, with implementations through the decades ranging from the relativistic klystron to modern intense relativistic electron beam technology. The paper notes that arrays of antennas are the only practical way to produce the large radiating areas necessary for an interstellar beacon, arrays like those already used in radio astronomy work. The construction of an efficient beacon is then considered against the constraints of cost optimization, considering the crucial relations between cost-optimal aperture and power. 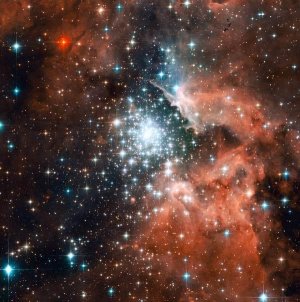 I leave you to the relevant equations and turn toward the implications in terms of transmission strategy. Mindful of the concept of a galactic habitable zone, the Benfords focus on stars that lie inward toward the galactic center at distances of greater than 1000 light years, a strategy they hope will target the highest number of possible civilizations. So if you are broadcasting in an attempt to reach likely ETIs, here is a method: Broadcast in a limited way, targeting the 90 percent of the galaxy’s stars that lie within nine degrees of the sky’s area, in the plane and hub of the galaxy, with special attention to areas along the galactic disk.

Whatever races might dwell further in from us toward the center, they must know the basic symmetry of the spiral. This suggests the natural corridor to communicate with them is along the spiral’s radius. (A radius is better than aiming along a spiral arm, since the arm curves away from any straight-line view of view. On the other hand, along our nearby Orion arm the stars are roughly the same age as ours.) This avenue maximizes the number of stars within a Beacon’s view, especially if we broadcast at the galactic hub. Thus, a Beacon should at least broadcast radially in both directions. Radiating into the full disk takes far more time and power; such Beacons will rarely visit any sector of the plane. Of course such distances imply rather larger Beacons.

Image: Beautiful, but this young cluster imaged by Hubble is an unlikely home to alien civilizations. Better to look in the direction of the galactic plane, and think in terms of older stars with higher prospects. Credit: NASA/ESA/STScI/AURA).

Thus we scan the plane of the galaxy often, broadcasting toward and away from galactic center frequently, with occasional bursts toward the densest collection of nearby stars along the Orion arm. And this is interesting: Broadcast toward the locations of transient but powerful bursts that have occasionally shown up in past SETI surveys. The paper concludes that cost-efficient beacons will be pulsed, narrowly directed and broadband in the 1-10 GHz region, with a preference for higher frequencies. If we apply these thoughts to other civilizations, assuming their own tendency to minimize costs and obtain the most efficient result, we develop the necessary counterbalancing strategy for SETI.

Given current SETI methods, would we detect such ‘searchlight beam’ beacons with short ‘dwell’ times as they sweep past? More on these issues next time. The paper is James, Gregory and Dominic Benford, “Cost Optimized Interstellar Beacons: METI,” available online.