A Beacon-Oriented Strategy for SETI

I’ve spent so much recent time on two SETI/METI papers by James, Gregory and Dominic Benford because they contain powerful arguments for re-thinking our current SETI strategy. By analyzing how we might construct cost-optimized interstellar beacons, the authors ask what those beacons might look like if other civilizations were turning them toward us. The results are striking: A distant beacon operating for maximum effect consistent with rational expense would offer up a pulsed signal that will be short and intermittent, recurring over periods of a month or year.

It will, in other words, be unlike the kind of persistent signal that conventional SETI is optimized to search for. Searches designed to sweep past stars quickly, hoping to find long-lasting beacons whose signature would be apparent, would rarely notice oddball signals that seem to come out of nowhere and then vanish. Tracking such signals, looking for signs of regularity and repetition, calls for a different strategy.

Image: Looking toward galactic center, a line of sight that may offer our best chance to intercept an interstellar beacon. The center of the Milky Way is behind the center of the photo. As many as thirty Messier objects are visible, including all types of nebulae and star clusters. The lines through the picture were caused by airplanes, and the dark objects in the foreground are trees. Credit: NASA/Dave Palmer.

But let’s stop for a moment. Given our inability to know who might be transmitting to us, how can we make any assumptions, given that we’re relating our own optimum cost strategy for beacons to theirs? The principle of parsimony seems reasonable to us — economic demands have a shaping effect on any project, especially long-term ones like interstellar communication. But can we assume the principle is equally valid for alien civilizations?

The Benfords’ METI paper analyzes these concerns, and their SETI paper summarizes nicely:

The optimum cost strategy leads directly to a remarkable cost insensitivity to the details of economic scaling. The ratio of costs for antenna area and system power depends on only the ratio of exponents… and not on the details of the technology. That ratio varies on Earth by only a factor of two. Both these costs may well be related principally to labor cost; if so it cancels out. This means fashions in underlying technology will matter little, and our experience may robustly represent that of other technological societies.

It’s an interesting argument to chew on and one developed at much greater length than I can summarize here — a read through the relevant sections will expose you to elegant and ingenious reasoning. And if we assume that cost-optimized beacons do exist, the interesting thing is that current SETI methods would be unlikely to find them. In current practice, search dwell times (the time when the apparatus is looking at a specific place) are only a few seconds long in survey operations, while ranging between 100 and 200 seconds for targeted searches. Couple that with long integration times on the order of 100 seconds — this means that short pulses tend to be integrated out of the results.

If we’re looking for short, pulsed signals rather than persistent ones, we’re also hampered by the fact that in most SETI searches to date, the amount of time between when the observer first looks at a target and then looks back at it in an attempt to confirm it is often a matter of days. It can be years when we’re talking about data from the SETI@Home effort. What it would take to identify beacons of the kind described here are searches of the galactic plane that operate for lengthy time frames, on the scale of years. Slow and steady does the job.

Our distant beacon will, given these assumptions, show up in our detectors for a much shorter period than conventional SETI assumes. It’s intriguing that previous searches have indeed noticed at least a few pulsed, intermittent signals that resemble this description of a beacon’s activities. A survey of galactic center reported on in 1997 by W.T. Sullivan (reference below), for example, could confirm nothing in repeat observations that would indicate a persistent beacon. But it did record “…“intriguing, non-repeatable, narrowband signals, apparently not of manmade origin and with some degree of concentration toward the galactic plane…” Again, these are one-time signals that do not repeat within the search period.

A close look at GCRT J1745-3009, an unusual transient bursting radio source some 1.25° south of galactic center, first discovered in 2002 and re-observed several times since, is a useful chance for the Benfords to do a beacon analysis using their parameters. It’s an interesting source, to be sure, with explanations from masers to flare stars, double neutron star binary pulsars, white dwarf pulsars and more all failing to fit the observations. The paper’s analysis shows that GCRT J1745-3009 is unlikely to be artificial, but if it is a cost-optimized beacon, it must be targeted given the fact that the field of stars it covers is quite small.

1) Stare at the direction of GCRT J1745-3009 at higher frequencies as both cost optimization and higher information-carrying ability argue. Another information-bearing signal could be at the optimum high frequencies, ~10 GHz. A temporal analysis should be conducted to search for structure in the bursts, since measurements to date have not looked for any message content.

2) look in the opposite direction, 180 degrees from the Center, to see if there’s another beam communicating toward GCRT J1745-3009. 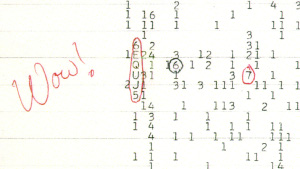 The method could tell us whether we’ve by chance intercepted an interstellar communication link. This particular source seems an unlikely candidate, but it is interesting enough to trigger subsequent study and gives us a chance to put the cost-optimized strategy to work. Another interesting candidate is the so-called ‘WOW’ signal seen at Ohio State in 1977. A year-long campaign directed at galactic center might uncover a follow-up, but it also gives us an idea of the kind of effort the search for the fleeting signals of such beacons might involve.

We will need to be patient and wait for recurring events that may arrive in intermittent bursts. Special attention should be paid to areas along the Galactic Disk where SETI searches have seen coherent signals that are non-recurring on their limited listening time intervals. Since most stars lie close to the galactic plane, as viewed from Earth, occasional pulses at small angles from that plane should have priority.

Thus the call for systematic scans of the entire galactic plane, emphasizing the importance of galactic center, with steady observing periods covering a span of years. For reasons discussed in the METI paper, the 10 GHz range is optimum as opposed to lower-frequency, more conventional SETI choices. Re-thinking our SETI strategy offers the chance to maximize the chances for detection, just as, the Benfords show, analyzing the demands of interstellar messaging (METI) can provide significant insights into the kind of signal we might find.

The papers are James Benford et al., “Cost Optimized Interstellar Beacons: METI,” available here, and Gregory Benford et al., “Cost Optimized Interstellar Beacons: SETI,” available here. As I’ve mentioned before, these papers work as a unit and should be read together, the one illuminating the other. The Sullivan paper I discuss above is Sullivan et al., “A Galactic Center Search For Extraterrestrial Intelligent Signals,” Astronomical and Biochemical Origins and the Search for Life in the Universe, IAU Colloquium 161, Publisher: Bologna, Italy, p. 653.