The Hunt for Ancient Antimatter

Antimatter’s great attraction from a propulsion standpoint is the ability to convert 100 percent of its mass into energy, a reaction impossible with fission or fusion methods. The trick, of course, is to find enough antimatter to use. We can produce it in particle accelerators but only in amounts that are vanishingly small. There is evidence that it is produced naturally, at least in trace amounts, in the relativistic jets produced by black holes and pulsars. Indeed, a cloud of antimatter 10,000 light years across has been described around our own galaxy’s center.

And at least one scientist, James Bickford (Draper Laboratory), has worked out ways to extract antimatter produced here in the Solar System, a method that he believes would be five orders of magnitude more cost effective than creating the stuff on Earth. But what about early antimatter, particles left over from the earliest days of the universe? According to prevalent theory, the universe may have been awash with the stuff shortly after the Big Bang, but most of it is assumed to have annihilated with ordinary matter, leaving only the slightly more numerous remnants of matter behind. Could any antimatter have survived? 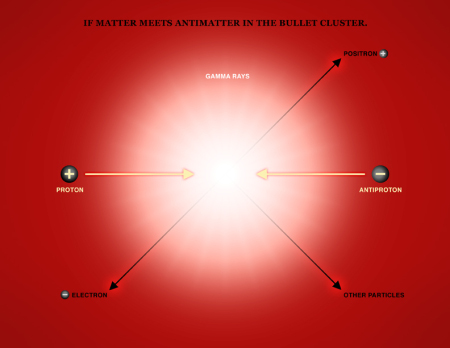 Image: Antimatter is made up of elementary particles that have the same masses as their corresponding matter counterparts but the opposite charges and magnetic properties. This illustration shows what happens when a particle of antimatter collides with one of matter. The particles annihilate each other and produce energy according to Einstein’s famous equation, E=mc2, mostly in the form of gamma rays, which scientists are looking for using the Compton observatory. Secondary particles are also produced. Credit: CXC/M. Weiss.

Gary Steigman, who has been studying these matters at Ohio State, lays out current thinking on matter/antimatter asymmetry in the early universe in a new paper. A primordial imbalance between matter and antimatter seems to have been essential to the emergence of the universe we see. And the key to the possibility of antimatter surviving from the Big Bang era may be inflation, when spacetime itself seems to have expanded exponentially:

“If clumps of matter and antimatter existed next to each other before inflation, they may now be separated by more than the scale of the observable Universe, so we would never see them meet. But, they might be separated on smaller scales, such as those of superclusters or clusters, which is a much more interesting possibility.”

Usefully, we might be able to observe evidence for such antimatter in collisions between two galactic clusters. That signature would be marked by X-rays from the hot gases involved in the collision and the gamma rays associated with antimatter annihilation. And as we’ve seen in recent times, the Bullet Cluster is an excellent laboratory for such study, being the relatively nearby result of cluster collision. The data thus far garnered from the Chandra X-ray Observatory and the Compton Gamma Ray Observatory are setting strict limits on possible antimatter stores.

At least that’s true in the Bullet Cluster, where the antimatter signature simply does not appear. If antimatter is present, these results mean it amounts to less than three parts per million in this system. The search continues, with Steigman hoping to learn whether other colliding galaxy clusters show a similar paucity of antimatter. It would be helpful if an antimatter signature could tell us about the mysterious period of inflation — how long, for example, did it last? — but even Steigman calls this a long shot. “The collision of matter and antimatter is the most efficient process for generating energy in the Universe, but it just may not happen on very large scales,” says the scientist. “But I’m not giving up yet…”

The paper is Steigman, “When clusters collide: constraints on antimatter on the largest scales,” Journal of Cosmology and Astroparticle Physics 10 (2 October 2008). Available online. Also available at the arXiv site. See as well this Chandra news release.

Next post: A Surprising Find from the Early Solar System