A SETI-based Look at New Horizons

Using eleven of the Allen Telescope Array’s 6.1-meter dishes, the SETI Institute and the Radio Astronomy Laboratory at the University of California (Berkeley) have detected the New Horizons spacecraft on its way to Pluto/Charon. New Horizons transmits an 8.4 GHz carrier signal that showed up readily on the SETI Prelude detection system. What I hadn’t realized was that snagging distant spacecraft transmitters is a standard part of SETI operations, as Jill Tarter notes in this brief article on the event posted at the New Horizons site:

“We look forward to checking in with New Horizons as a routine, end-to-end test of our system health. As this spacecraft travels farther, and its signals grow weaker, we will be building out the Allen Telescope Array from 42 to 350 antennas, and thus can look forward to a long-term relationship.”

Image: New Horizons as tracked by the Allen Telescope Array. This plot shows 678 hertz (Hz) of spectrum collected over 98 seconds. The New Horizons signal can be easily seen as a bright diagonal line, drifting at rate of -0.6 > Hz/second. Credit: SETI Institute. 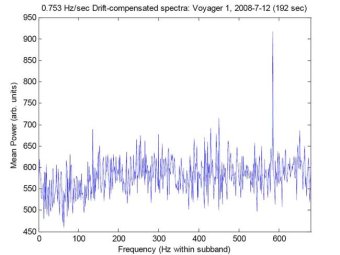 Just how long-term a relationship it may be is shown by this second image, the result of combining fifteen of the ATA’s antennae in October to detect the carrier from Voyager 1. The most distant of all man-made objects, Voyager transmitted from 108 AU, a signal described by Tarter as reliable and ‘…with a very high signal to noise ratio.’ New Horizons may be a newcomer compared to the 37-year old Voyager, but it will doubtless offer fodder for the ATA’s antenna farm for decades to come. The method at work here is called ‘beamforming,’ a way to process the incoming signal that allows multiple antennae to function together with maximum directionality.

Combining signals from a host of different antennae so that detectors can do their work is no easy task, but it’s heartening to this SETI skeptic that the capabilities of the Allen Array are wide. Tarter described them in a recent Space.com posting:

One of the good things about the ATA is that there are likely to be many stars that are visible at any one time within its large field of view, so with multiple beamformers, and multiple detectors, we can explore multiple stars simultaneously, at different frequencies if we want. Furthermore, we can do this while our astronomy colleagues are mapping the sky for hydrogen gas, or large biogenic molecules, or other phenomena of scientific interest to them. This multiplexing potential is a new and exciting innovation that will speed up the SETI searching in the next decades.

Thus, while a new generation of SETI signal detectors called SonATA (SETI on the ATA) goes through its shakedown (a recent success in tracking the relatively nearby Rosetta spacecraft was a success), we can continue to do interesting radio astronomy with the same instrumentation. That’s a satisfying situation in the context of continuing debate about SETI methods and the best ways to optimize our chances for finding the signal of an extraterrestrial civilization. And it points to the growing maturity of the kind of interferometry used here, linking numerous small antennae on the impressive new hardware of the growing Allen site.

Next post: An Inflatable Sail to the Oort Cloud