Now here’s a comprehensive task for you. Take about a dozen primordial minerals found in interstellar dust grains and figure out what processes — physical, chemical, biological — led to the appearance of the thousands of minerals we find on our planet today. The job was undertaken by Robert Hazen and Dominic Papineau (Carnegie Institution Geophysical Laboratory) and colleagues, and it produced startling results: Of the roughly 4300 known types of minerals on Earth (fifty new types identified each year), up to two-thirds can be linked to biological activity.

Mineral evolution? In a sense, although Hazen is quick to qualify the statement:

“It’s a different way of looking at minerals from more traditional approaches. Mineral evolution is obviously different from Darwinian evolution — minerals don’t mutate, reproduce or compete like living organisms. But we found both the variety and relative abundances of minerals have changed dramatically over more than 4.5 billion years of Earth’s history.”

Those early dust grains gave us a set of basic chemical elements, but it took the temperature and pressure changes as the Solar System coalesced to produce a wider range of minerals. Hazen and Papineau’s work suggests that sixty different minerals appeared in this era, with many more forming when volcanic activity and water eventually came into play on planetary surfaces. Mars and Venus, with about five hundred mineral species in their surface rocks, offer a glimpse of this phase of mineral formation. On Earth, plate tectonics, creating movement among continents and churning the ocean basins, produced new chemical environments that brought the mineral count up past a thousand. 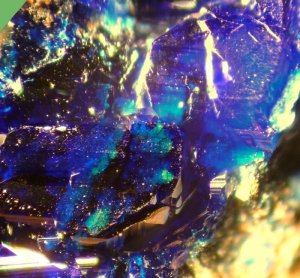 The key to true mineral diversification, though, is life. Because so many important minerals are oxidized weathering products, they owe their existence to an oxygen-rich atmosphere, itself the result of photosynthesis. The lovely blue and green minerals azurite and malachite, for example, could only form in an oxygen-rich environment. The development of microorganisms and plants also plays into the formation of clay minerals, while ocean dwelling creatures with shells and skeletons develop deposits of minerals like calcite. In every respect, the byplay between life and minerals is complex. In a useful video describing his work, Hazen explains:

“The interplay between minerals and life works both ways. It turns out that the origin of life may have been absolutely dependent on certain minerals. Mineral surfaces are the perfect place to concentrate, to select, to organize, to make larger structures like polymers, chains of molecules that have biological function. So minerals may have played a key role in life’s origins. but by the same token — and this is what I find so amazing — life played a key role in the minerals’ origin. If you have a world where you have no oxygen, perhaps Mars, certainly Mercury, these minerals will not form. there’s no way to produce them. Life has a role in the origin of minerals just the way minerals have a role in the origin of life.”

Image: This lustrous azurite under intense light shows transparency and overgrowth on malachite clusters just below the surface. Only the presence of oxygen can produce these minerals. Origin: New Cobar Mine, New South Wales, Australia. Credit: Vic Cloete.

All of this leaves a record that can be examined through the science of mineralogy and it’s one that could be exploited as we examine other worlds. We could, in other words, see evidence of life in the mineral diversity we find on a distant planet. From the paper on this work:

Arguably the single most important cause for mineralogical diversification is Earth’s surface oxygenation associated with biological activity, which may be responsible directly or indirectly for more than two thirds of all known mineral species. Thus, for at least the last 2.5 billion years, and possible since the emergence of life, Earth’s mineralogy has evolved in parallel with biology. Accordingly, remote observations of the mineralogy of other moons and planets may provide crucial evidence for biolgical influences beyond Earth.

In Hazen’s view, the connection between the sciences could not be more profound, and the story of the development of individual minerals on a world like ours is inseparable from the changes wrought by biology. This is a provocative way of looking at mineralogy that stresses the development of a mineral identity over time, with obvious ramifications for planetary history. The paper is Hazen, Papineau et al., “Mineral evolution,” American Mineralogist Vol. 93, pp. 1693-1720 (in press).