Billions of Positrons Created in Laboratory

Irradiate a millimeter-thick gold target with the right kind of laser and you might get a surprise in the form of 100 billion positrons, the antimatter equivalent of electrons. Researchers had been studying the process at Lawrence Livermore National Laboratory, where they used thin targets that produced far fewer positrons. The new laser method came about through simulations that showed a thicker target was more effective. 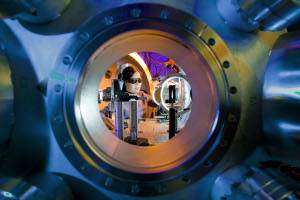 And suddenly lasers and antimatter are again making news. Hui Chen is the Livermore scientist behind this work:

“We’ve detected far more anti-matter than anyone else has ever measured in a laser experiment. We’ve demonstrated the creation of a significant number of positrons using a short-pulse laser.”

What’s happening here is that ionized electrons are interacting with gold nuclei, giving off energy that decays into matter and antimatter. It’s a method that has been studied before at Livermore, using the laboratory’s petawatt laser. An article by physicist Michael Perry explains the interactions that laser achieved, first produced about a decade ago:

The intense beam of Livermore’s Petawatt laser was powerful enough to break up atoms by causing reactions in their nuclei. Accelerated by the laser, electrons traveling at nearly the speed of light collided with nuclei in a gold foil target, producing gamma rays that knocked out some of the neutrons from other gold nuclei and caused the gold to decay into elements such as platinum. Gamma rays also zoomed in on a layer of uranium sitting behind the gold and split uranium nuclei into lighter elements. Before the Petawatt, all of these effects had been solely in the domain of particle accelerators or nuclear reactors.

Accelerated to energies exceeding 100 megaelectronvolts, the electrons in the gold targets produced high-energy x rays. These in turn decayed into pairs of electrons and their antimatter counterparts, positrons, in such large numbers as to possibly generate an electron-positron plasma, never before created in the laboratory. An intense beam of protons also turned up. Not only was the Petawatt the most powerful laser in the world, but, unexpectedly, it also was a powerful ion accelerator.

The petawatt laser was decommissioned in mid-1999. Its original development centered on the study of inertial confinement fusion, in which a pellet of fuel could be ignited through intense laser bombardment. Variations on inertial confinement fusion play interestingly through interstellar propulsion studies, including the massive Daedalus probe designed by the British Interplanetary Society, which would have used deuterium and helium-3 as its fodder for a trip to Barnard’s Star.

But the petawatt laser also opened up the possibility of using a laser to do things particle accelerators had been called upon to do in the past. And now we’ve moved significantly beyond the earlier results — the petawatt experimenters detected roughly 100 antimatter particles compared to Chen’s one million. And note this: Chen’s number refers to particles that were directly detected, a result that produces an overall estimate of 100 billion positrons produced in the entire experiment.

We’ve looked in these pages at the possibility of harvesting naturally forming antimatter found in our own Solar System, even near the Earth, where cosmic ray interactions with the upper atmosphere produce small quantities. And the presence of antimatter near the center of our galaxy has been established, detectable because matter/antimatter annihilation produces gamma rays. The trick has always been that harvesting antimatter — or producing it in accelerators — yields small amounts at great expense. The latest work at least offers hope for more robust laboratory study of a material whose propulsive properties have long attracted interstellar theorists.

Just how significant a step this is remains to be seen, but I note what Peter Beiersdorfer, who works with Chen at Livermore, has to say:

“We’ve entered a new era. Now, that we’ve looked for it, it’s almost like it hit us right on the head. We envision a center for antimatter research, using lasers as cheaper antimatter factories.”

We’ll know more shortly, for Chen is presenting her work at the American Physical Society’s Division of Plasma Physics meeting that runs through Friday this week. A Livermore news release is available. Thanks to Centauri Dreams reader Leith for the heads-up on this work.