As we learn more about cosmic rays, it becomes clear that these incoming particles — protons and electrons accelerated to high energy levels — do not reach us uniformly. Just a few days ago we saw that the ATIC (Advanced Thin Ionization Calorimeter) experiment had revealed a source of cosmic rays relatively close to the Earth. Now the Milagro Gamma-Ray Observatory, based at Los Alamos National Laboratory, has found two such cosmic ray ‘hot spots.’ Again we are looking at a source of high energy cosmic rays not terribly far (in galactic terms) from our planet.

Jordan Goodman (University of Maryland) is principal investigator for Milagro:

“These two results may be due to the same, or different, astrophysical phenomenon. However, they both suggest the presence of high-energy particle acceleration in the vicinity of the earth. Our new findings point to general locations for the localized excesses of cosmic-ray protons observed with the Milagro observatory.”

Milagro has been monitoring the entire northern hemisphere sky since 2000, recording over 200 billion cosmic ray collisions with the atmosphere. Such collisions create a shower of secondary particles that reach the surface, collisions now observed in sufficient numbers for the Milagro collaboration to see statistical peaks like the two most recently observed. The results are intriguing because the magnetic field of the Milky Way deflects cosmic rays, making it difficult to pin down their source. Now we see peaks that imply sources closer to our planet. 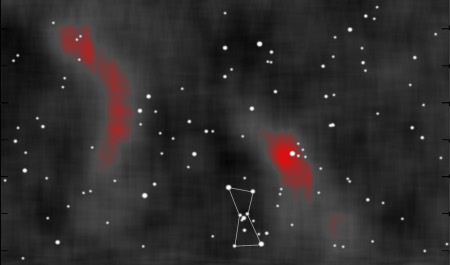 Image: An international team of researchers, using Los Alamos National Laboratory’s Milagro observatory, has seen for the first time two distinct hot spots that appear to be bombarding Earth with an excess of cosmic rays. The hot spots were identified in the two red-colored regions near the constellation Orion. Credit: John Pretz.

So what is the source of these phenomena? And why are these peaks found to be stronger in winter than in summer? All we can say at present is that they raise more questions than they answer, including the issue of how cosmic rays originate, and the more immediate question of whether the Solar System’s movements through the interstellar medium may have something to do with how they arrive. That latter issue points out how little we know about the heliosphere, and how much we could use a dedicated mission to this distant region. Note this, which I’m drawing from an article on the American Physical Society site by Karl-Heinz Kampert (University of Wuppertal, Germany):

Some clues may come from the actual sky position of the hot spots… The Milagro team noticed a directional coincidence of the stronger of the two hot spots with the heliotail. The heliotail is located in the direction opposite to the motion of the solar system with respect to the local interstellar medium (ISM), but there is no model of cosmic-ray acceleration in this region, so it may be purely coincidental.

Yes, and there’s also the fact that the hot spots encompass the Geminga pulsar that resulted from a relatively nearby supernova. Are the hot spots related to the supernova event, or is there some other acceleration mechanism nearby that can account for the high energies of these cosmic rays? We need more data. The Tibet Air Shower Gamma Array experiment has collected a huge amount of data (more than Milagro), within which are clues to what may be another cosmic ray ‘hot spot’ near Cygnus. As Kampert notes, getting the data from these teams together for refinement is a logical next step.

Addendum: Dennis Overbye discusses the ATIC findings, among other results, in this New York Times article, looking at them in the context of a possible dark matter signature.