It hasn’t been all that long since Hanny van Arkel, a Dutch school teacher, lent her name to the anomalous object since known as ‘Hanny’s Voorwerp.’ Working with data from the Galaxy Zoo project, van Arkel was scanning galaxy images when she ran across what seemed to be a green blob of extremely hot gas with a hole in its center. That hole turned out to be 16000 light years across, its cause unknown, and the object itself seemed to be lit by an unseen source. Theories abounded, including a ‘light echo’ from a defunct quasar in a nearby galaxy.

And then there was the fact that the remarkably hot object (15000 degrees Celsius or more) was not only enormous but also empty of stars. Baffling astronomers for the past year, Hanny’s Voorwerp may now be swimming into sharper focus. An international team has been observing both the object and the nearby galaxy IC2497 using the Westerbork Synthesis Radio Telescope, with results that indicate the presence of a jet coming from a massive black hole at the center of the galaxy. Mike Garrett (ASTRON/Leiden) comments:

“It looks as though the jet emanating from the black hole clears a path through the dense interstellar medium of IC2497 towards Hanny’s Voorwerp. This cleared channel permits
the beam of intense optical and ultraviolet emission associated with the black hole, to illuminate a small part of a large gas cloud that partially surrounds the galaxy. The optical and ultraviolet emission heats and ionises the gas cloud, thus creating the phenomena known as Hanny’s Voorwerp.”

Meanwhile, the new data indicate that the huge hydrogen cloud, extending hundreds of thousands of light years and boasting a total mass amounting to five billion times that of the Sun, may well be the result of tidal interactions between IC2497 and another galaxy hundreds of millions of years ago. Hanny’s Voorwerp just might be the signpost of a cosmic mishap as these galaxies passed in the night, although even that theory leaves us with what Garrett calls ‘…a few more secrets to reveal.’ More radio telescope observations are planned in the near future. 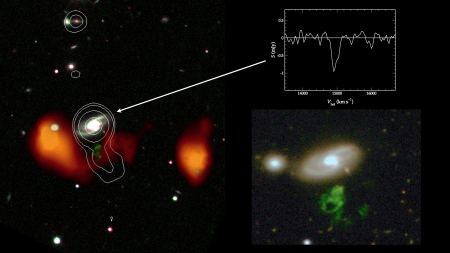