Brown dwarfs raise plenty of questions, not the least of which is how they form. Work up to some fifteen times Jupiter’s mass and the planet in question starts to look more like a brown dwarf, a ‘failed star’ that cannot sustain fusion at its core. Somewhere around 75 Jupiter masses long-term fusion ignites and you’re in the territory of a true star. This brown dwarf zone between the two poles makes these objects provocative — do they form the way most planets seem to do by collecting more and more rocky materials and eventually a gas envelope?

Or does a brown dwarf form, like a star, through the gravitational collapse of a gas cloud? The latter idea gets a boost from recent work from the Harvard-Smithsonian Center for Astrophysics. Astronomers have now found a stream of carbon monoxide flowing out from a young brown dwarf known as ISO-Oph 102. This gets interesting at several levels, the first being that the outflow from the dwarf resembles what happens in larger stars as they form, a stream of ejected materials pushing out from two opposite jets. The process helps the young star shed angular momentum as it draws in material from the surrounding disk. 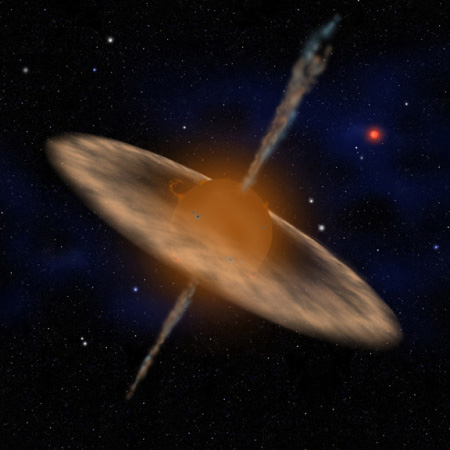 Image: This artist’s conception zooms in on the brown dwarf and its accretion disk. The discovery of a bipolar molecular outflow at ISO-Oph 102 offers the first strong evidence in favor of brown dwarf formation through gravitational collapse. Credit: David A. Aguilar (CfA)

The outflow from ISO-Oph 102, as we might expect, is considerably smaller than found in low-mass stars, as the paper points out:

We detect a bipolar molecular outﬂow from the brown dwarf, demonstrating that this outﬂow mechanism as seen in young stars continues to operate down to the masses of brown dwarfs. We show that the outﬂow mass is much smaller than typical values found in low-mass stars by two to three orders of magnitude. We also combine our radio data with infrared data to estimate disk parameters. The infrared spectrum of ISO-Oph 102 shows strong crystalline silicate features. This demonstrates dust processing in the protoplanetary disk…of the brown dwarf. The coexistence of the molecular outﬂow with the crystallization of dust grains could be of importance for models of planet formation.

So on the one hand, the picture of brown dwarfs forming through gravitational collapse is upheld, the major variable being the amount of disk material available, which would regulate how large a brown dwarf or star might emerge from a common star formation process. The other thing to note here is the impact on planetary formation around these objects. The authors surmise that the outflow from a brown dwarf may be longer lived than those coming from low-mass stars, perhaps a factor in sweeping gas out from the protoplanetary disk and forming rocky worlds.

The paper is Phan-Bao et al., “First Confirmed Detection of a Bipolar Molecular Outflow from a Young Brown Dwarf,” in press at Astrophysical Journal Letters and available online.