Caleb Scharf is director of the Columbia Astrobiology Center and author of a new book I intended to mention in Saturday’s Notes & Queries section before running out of time. I want to be sure to insert it now, because if you’re getting serious about the study of astrobiology, you’ll want to know about this title. Extrasolar Planets and Astrobiology (University Science Books, 2008) is designed for university courses on the subject, with extensive background not only in the relevant physics and mathematics, but also in chemistry, biology and geophysics, studies the multi-faceted world of astrobiology melds into a complex whole. 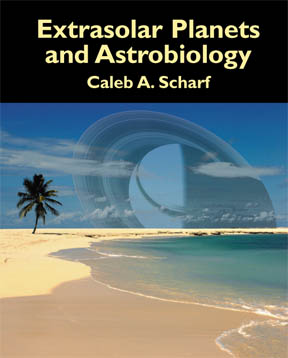 The book is actually based on the upper-level course Scharf has been teaching at Columbia. The author tells me in an e-mail that his intent is specifically to reach students serious about moving into the discipline: “The aim is to provide the basis for students to gain a real understanding of how to actually do research on exoplanets, as well as some of the broader science encompassed by astrobiology.” Making the point are the exercises designed for each chapter to draw newcomers into research and provide examples for calculation. I also want to mention the book’s online component, where news items are cross-referenced with the book.

And I like what planet-hunter Geoff Marcy has to say in his foreword, especially in its hint of long-term interstellar travel:

For the future, NASA and the Jet Propulsion Laboratory have developed the Space Interferometry Mission that will use the interference of light waves gathered by a spaceborne pair of telescopes to detect earth-like planets, and measure their masses, around nearby stars. Just over the horizon are plans for a spaceborne telescope that blocks the glare of nearby stars, allowing us to take images of Earth-like planets and to determine their chemical composition from their spectra. Any worlds having oxygen atmospheres and surface oceans will smell fishy from 40 light years. This census of habitable earths will fill GoogleGalaxy with ports-of-call for our grandchildren who will send robotic probes and later themselves, at least those with extreme daring and patience. The urge to explore these new worlds comes from our anthropological roots at Olduvai Gorge two million years ago. What sets us apart from the stones and the stars is our insatiable desire to understand our kinship with both.

Nicely put, and I especially like that GoogleGalaxy bit, the updated and searchable version of the Encyclopedia Galactica. Scharf looks hard at how we study planet and star formation, how we observe exoplanets and undertake chemical and biological modeling. I’m glad to see that he does not claim definitive status for the book in a field as malleable as this, but treats astrobiology as an ’emerging interdiscipline’ — exactly the right phrase — while his audience is “…the student or researcher in astronomy or physics, or possibly someone from the geophysical, chemical, or biological sciences, looking for a deeper understanding of the ‘astro’ in astrobiology.” Those looking for an astrobiology career will want Extrasolar Planets and Astrobiology on their shelves.

And thanks to all who have been asking about our Frontiers of Propulsion Science book, which is now turning up on the AIAA site. Although we had hoped for publication by the end of the year, it’s now looking like February is the likely target. Edited by Marc Millis and Eric Davis, Frontiers of Propulsion Science is a graduate/professional-level text and a first-ever compilation, as AIAA points out on the site, of the emerging science behind breakthrough concepts like warp drive and faster than light travel. In these areas we’re obviously still very early in the game:

This is a nascent field where a variety of concepts and issues are being explored in the scientific literature, beginning in about the early 1990s. The collective status is still in step 1 and 2 of the scientific method, with initial observations being made and initial hypotheses being formulated, but a small number of approaches are already at step 4, with experiments underway. This emerging science, combined with the realization that rockets are fundamentally inadequate for interstellar exploration, led NASA to support the Breakthrough Propulsion Physics Project from 1996 through 2002.

The hope is that a book like this can energize research so that more studies are performed, more papers written, and new compilations can begin to emerge on a regular basis. Our universities need the reference tools to bring structure to the courses that grow out of these studies, and we hope Frontiers of Propulsion Science is a step in that direction.