A New Angle on Dark Energy

The best news about recent dark energy findings is that they offer new ways to study the phenomenon. It’s only been ten years since dark energy — thought to be the origin of the universe’s accelerating expansion — emerged from the study of supernovae. Simply put, these exploding stars weren’t slowing as they moved away from us, but were actually speeding up. It was a controversial result, to say the least, and one which remains one of science’s primary riddles. But Chandra X-ray Observatory observations may be providing additional clues.

The team on this work is led by Alexey Vikhlinin (Harvard-Smithsonian Center for Astrophysics), its effort focused on galactic clusters. A model of the cosmos that incorporates dark energy is the only thing that explains why these clusters have grown so slowly during the last five billion years, in what Vikhlinin calls “arrested development of the universe.” Dark energy seems to be working against the gravitational forces that allow clusters to draw in new matter. 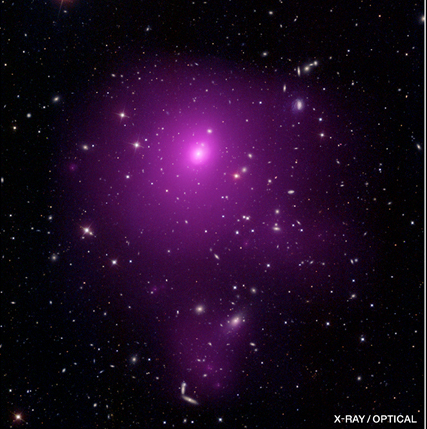 Image: The galaxy cluster Abell 85, located about 740 million light years from Earth. The purple emission is multi-million degree gas detected in X-rays by NASA’s Chandra X-ray Observatory and the other colors show galaxies in an optical image from the Sloan Digital Sky Survey. This galaxy cluster is one of 86 observed by Chandra to trace how dark energy has stifled the growth of these massive structures over the last 7 billion years. Galaxy clusters are the largest collapsed objects in the Universe and are ideal for studying the properties of dark energy, the mysterious form of repulsive gravity that is driving the accelerated expansion of the Universe. Credit: NASA/CXC/SAO/A.Vikhlinin et al.

Better still, the results dovetail nicely with the supernovae work, a vindication of the idea that the universe is dominated by dark energy. The fascination of this work is in just how big the questions are. Dark energy could be the cosmological constant described by Einstein, an energy he initially believed could work against the force of gravity to keep the universe from collapsing. These findings keep that prospect alive. The power of dark energy is denoted by the number w, the equation of state, and Vikhlinin’s team derives a value for w not all that dissimilar from that of the supposed cosmological constant. But huge issues remain.

Ponder this: Just as we know little about dark energy, we know little about dark matter, whose presence seems necessary to explain how galaxies form around us in the cosmos. Any studies of galactic clusters have to factor in dark matter, but doing so puts us on tentative ground without a firmer basis for understanding what dark matter actually is. Dennis Overbye picks up on all the uncertainties in a recent New York Times story, in which he notes that the combined supernova and galactic cluster measurements, folded in with observations of the cosmic microwave background, have tightened up our estimate of w:

That looks like an improvement of a factor of 2 on the uncertainty charts that dark energy specialists show to one another in meetings and papers, but critics caution that combining disparate types of measurements can result in an artificially small error that masks underlying uncertainties. Astronomers, for example, still do not have a good theory to explain how their standard candles, supernovas, explode, and theories of cluster growth depend on assumptions about the nature of the dark matter in the universe and the nature of the original fluctuations that give birth to them.

This tantalizing work on galactic clusters, then, implies more than it proves, but the implications are interesting indeed. Thus William Forman (Smithsonian Astrophysical Laboratory), a co-author of the study that will appear in February:

“Putting all of this data together gives us the strongest evidence yet that dark energy is the cosmological constant, or in other words, that ‘nothing weighs something.’ A lot more testing is needed, but so far Einstein’s theory is looking as good as ever.”

Dark energy remains a personal fascination for two reasons. An effect that seems to oppose gravity is of obvious interest in that it promises new insights into physics. A sufficiently advanced civilization might one day harness such a force for propulsion. In the broader sense, dark energy points out how much we have yet to learn, a necessary reminder that a certain humility is a virtue in the study of cosmic effects so recently uncovered. Again we turn to Einstein, no stranger to re-thinking big ideas, who once said “Whoever undertakes to set himself up as a judge of Truth and Knowledge is shipwrecked by the laughter of the gods.”