Give a young star two or three million years and planets are likely to emerge from the dust and gas surrounding it. But note the wild card shown in the image below, the danger of proximity to more massive stars. In the image, several stars not so different from our Sun at that stage of its evolution are shown with streams of material flowing away from them. We’re seeing their outer disk material blown away by nearby class O stars, while inner materials might still survive to form rocky, terrestrial worlds close to the parent star. 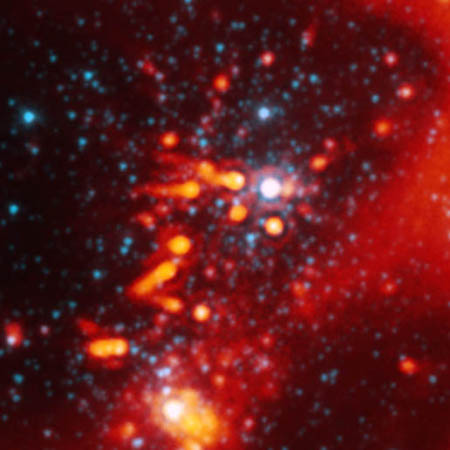 Image: This image from NASA’s Spitzer Space Telescope shows the nasty effects of living near a group of massive stars: radiation and winds from the massive stars (white spot in center) are blasting planet-making material away from stars like our Sun. The planetary material can be seen as comet-like tails behind three stars near the center of the picture. The tails are pointing away from the massive stellar furnaces that are blowing them outward. Credit: NASA/JPL-Caltech/Harvard-Smithsonian CfA.

This is a star forming region known as W5, 6500 light years from us in the constellation Cassiopeia, as seen in a composite of infrared data from the Spitzer Space Telescope. The massive stars involved are each about twenty times as massive as the Sun; the stars they are swamping with radiation and solar wind are about one light year away. And in astronomical terms, we’re looking at a short-lived phenomenon. JPL’s Xavier Koenig, lead author of a recent paper on this work, says these much abused disks will be gone in a million years.

It’s interesting to speculate on our Sun’s own origins given images like these. Surely it was born into a massive star-forming cloud which, over the eons, was dispersed as the stars it spawned moved away from each other. These are disruptive environments that eventually put the brakes on further star formation, but not before producing multiple stellar generations, as shown in the second infrared image of W5 from Spitzer below. Koenig and team have been studying W5 extensively with regard to this ‘triggering’ phenomenon. 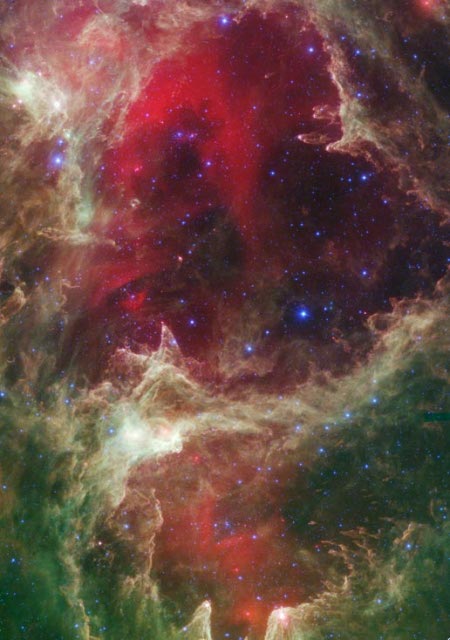 Image: Generations of stars can be seen in this new infrared portrait from NASA’s Spitzer Space Telescope. In this wispy star-forming region, called W5, the oldest stars can be seen as blue dots in the centers of the two hollow cavities (other blue dots are background and foreground stars not associated with the region). Younger stars line the rims of the cavities, and some can be seen as pink dots at the tips of the elephant-trunk-like pillars. The white knotty areas are where the youngest stars are forming. Red shows heated dust that pervades the region’s cavities, while green highlights dense clouds. Credit: NASA/JPL-Caltech/Harvard-Smithsonian CfA.