Impacts, Diamonds and the Younger Dryas

The 1300-year cold spell known as the Younger Dryas is back in the news. The sudden climate change, occurring between twelve and thirteen thousand years ago, may be related to the extinction of large species like the saber-tooth tiger and could have something to do with the disappearance of the Clovis culture, a people whose arrival in the Americas can be traced through their distinctive artifacts. Last year a team from sixteen institutions proposed that the climate change was the result of an impact event possibly involving multiple airbursts of cosmic debris.

That theory has been regarded with skepticism, but Douglas Kennett (University of Oregon), who worked with the original team, now says that its research has uncovered billions of nanometer-sized diamonds concentrated in sediments in six locations, ranging from Arizona to Oklahoma, Michigan, South Carolina, Manitoba and Alberta. Such nano-diamonds are produced under the kind of high temperatures and pressures associated with impacts and have been found in meteorites. Says Kennett:

“The nanodiamonds that we found at all six locations exist only in sediments associated with the Younger Dryas Boundary layers, not above it or below it. These discoveries provide strong evidence for a cosmic impact event at approximately 12,900 years ago that would have had enormous environmental consequences for plants, animals and humans across North America.”

The Clovis association is obviously interesting. One of the sediment layers in question was found adjacent to Clovis materials at Murray Springs, AZ. The Clovis culture seems to have lasted no more than 800 years, being replaced by more localized cultures apparently deriving from it. The question is whether we can attribute what may have been gradual cultural change to a sudden impact event and associated climate change. 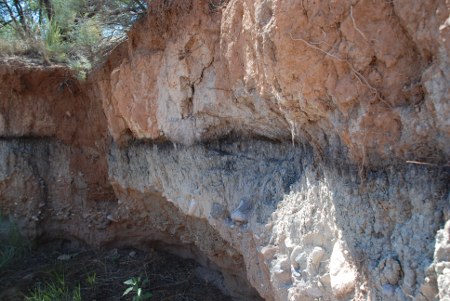 Image: Nanometer-sized diamonds occur at the base a layer of sediment directly above the remains of extinct animals (mammoths, dire wolves, etc.) and artifacts from Clovis culture at the research site in Murray Springs, Arizona. Credit: University of Oregon.

So how convincing is the theory? I was interested to see that University of Hawaii scientist Gary Huss, who was a reviewer of the paper the team published today in Science, thinks the new work makes the theory more tenable. As quoted in the New York Times, Huss says:

“They have a hypothesis that explains several things that hard to explain any other way. Diamonds are less convincing by themselves, but they strengthen their case considerably.”

And geology consultant Allen West is quoted in the same story to the effect that the team has now traced microscopic diamond deposits to over thirty sites, ranging from offshore California to Germany. The six sites considered in the Science paper show the same pattern: The diamond layer correlates to the date of the supposed impact. Moreover, there’s this, also from the Times article:

…the scientists reported last month at a meeting of the American Geophysical Union in San Francisco, the carbon atoms inside some of the diamonds are lined up in a hexagonal crystal pattern instead of the usual cubic structure. The hexagonal diamonds, formed by extraordinary heat and pressure, have been found only at impact craters and within meteorites and cannot be formed in forest fires or volcanic eruptions, Dr. West said.

But where are the kinds of craters we would expect to find from such events? The lack of such points to how tentative this hypothesis is, but also to the need for continuing to explore it. For the timing of the would-be impact and the disappearance of ice age mammals amidst the sudden cooling makes for a puzzling series of coincidences, one that further field work may help us explain. With thirty sites in play, that could take a considerable amount of time.