We continue to follow the American Astronomical Society’s meeting in Long Beach with fascination. This has, indeed, become AAS week in these pages. But amidst the news of brown dwarf discoveries, a more massive Milky Way than previously thought, and asteroids around white dwarf stars, the story of a genuine mystery stands out. Such a mystery is the optical transient known as SCP 06F6, a flash of light picked up by the Hubble Space Telescope back in 2006. Have a look at the images below: 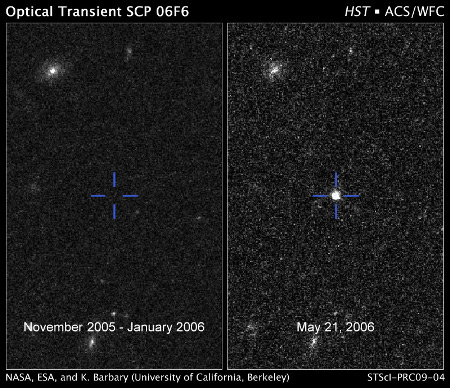 Image: This pair of NASA Hubble Space Telescope pictures shows the appearance of a mysterious burst of light that was detected on February 21, 2006. The event was detected serendipitously in a Hubble search for supernovae in a distant cluster of galaxies. The light-signature of this event does not match the behavior of a supernova or any previously observed astronomical transient phenomenon in the universe. Credit: : NASA, ESA, and K. Barbary (University of California, Berkeley/Lawrence Berkeley National Lab, Supernova Cosmology Project).

Kyle Barbary (Lawrence Berkeley National Laboratory) described follow-up work on this event to the gathered astronomers in Long Beach. Flashes of light from the cosmos are, of course, not rare in themselves — think supernovae, for example — but exploding stars peak after seventy days, whereas what Hubble saw steadily rose in brightness for a remarkable 100 days and then dimmed, more or less at the same rate, until it was gone. Nor does the transient suggest a gravitational lensing event, which would be much shorter. So what was it, and where did it occur?

The questions aren’t easy to answer. Hubble was looking at a galactic cluster eight billion light years away in the constellation Boötes when the event was detected, but the object could be anywhere along that line, which means it could even be in our own galaxy. Search through astronomical catalogs and you won’t find any sign of a star or galaxy where the flash occurred. Moreover, the light from the object fails to tag a specific element, although there is some suggestion we may be looking at redshifted molecular carbon absorption lines. If so, that would imply the source is a star approximately one billion light years away.

This is a signature, in other words, like no other celestial event ever recorded. The range of possible explanations thus far advanced is wide, an indication of just how odd this event really is. One theory is that we detected a collision between a white dwarf and a black hole, but that ranks as nothing more than a hypothesis at this point. Says Barbary, “We have never seen anything like it.”